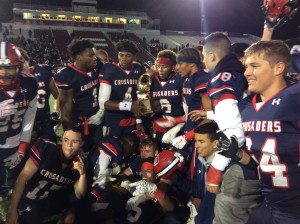 p to Buffalo today and tomorrow will play the St. Francis Red Raiders of Athol Springs who defeated the champions of last years State Title Game Canisius in the Monsignor Martin Championship.  Kickoff is slated for 1:00 PM at Grand Island High school.  Last year Stepinac fell in the insuagural championship game to Canisius, for the second straight year they come into the game having gone undefeated throughout the entire season.

Archbishop Stepinac comes in as the #1 ranked team in New York State by the New York State Sportswriters Association, St. Francis comes into the game ranked #10 in the same rankings.  St. Francis traveled down to Long Island back on September 12th and defeated Holy Trinity in a non league game.  After some early losses St. Francis has gotten on a late season run of 4 straight victories heading into tomorrows contest.

The Game will be broadcast live by MSG Varsity. Click here for a link to the preview and live broadcast.