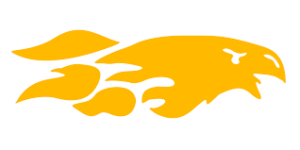 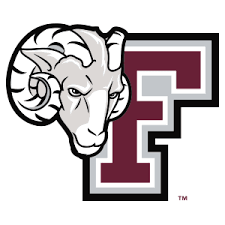 A rematch of last season’s title game, which Kellenberg won 54-19, with each week that comes and goes, this Firebirds senior class moves ever closer to finishing their varsity careers with immaculate status…A group of young men who have known nothing but victory for the better part of the past three years (tracing it all the way back to their 2016 Junior Varsity title team that lost just twice), the Uniondale based school rooted in the Marianist tradition has dominated this rivalry during the course of the past calendar year, following up their aforementioned one-sided win in the 2017 title game by pitching a 41-0 shutout over the Rams just two weeks ago in the regular season finale.

Immensely gifted on both sides of the ball, the Blue & Gold boost the top-rated offense (40.2 ppg) and defense (allowing 12 points/game) in the double-A division and rank 3rd and 2nd respectively with regard to the NYCHSFL as a whole…Just once during their 20-game winning streak have they won by a margin of under 10 points (33-32 over St. Peter’s during week 7 of the 2018 season) and they rectified that situation by defeating that same opponent 48-14 in last week’s quarterfinal round. 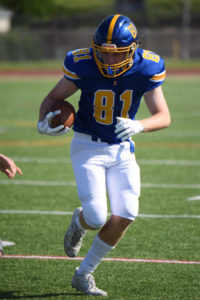 Renowned for their legendary land attack, Kellenberg is averaging 286 yards and more than four touchdowns per appearance this season on the ground alone…In the engineer’s seat for this runaway train of an offensive juggernaut is the combo of senior signal caller, Matt Sluka, and junior tailback, Jordan Delucia.  The former is a returning 2nd team All-Stater, whereas the latter is well on his way to becoming the second member of his family to garner All-State recognition (older brother, Jason, was an Honorable Mention in 2014)…And both have been absolute Ram killers during the 2017 and 2018 season…Among the three games, Sluka has rushed for 546 yards (including a career-best 244 during the 2017 regular season) and nine touchdowns versus Fordham Prep….Delucia, whose personal-best also happened to occur against the Rams (226 yards during the last week of the 2018 regular season), would miss the first of two meetings between the two programs last year, but made up for it by running for 125 yards and one touchdown on just four handles in the 2017 title game.  Combined, he has torched FP for 349 yards and a pair of scores between the past two seasons…Both Sluka (140 yards, 4 rushing touchdowns) and Delucia (145 yards, 1 touchdown) are fresh off of spectacular performances in last weekend’s quarterfinal victory over St. Peter’s….Senior, Frankie Roder, is another Firebird who always looks forward to facing the Rams.  The 6’2, 173-pounder hailing from Franklin Square, averaged 109.5 yards rushing and scored two touchdowns last season versus Fordham Prep. 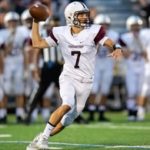 Adding to what was already a pretty complicated and troublesome predicament for the visiting Rams is the fact that Sluka has honed his skills as a passer and is now lethal in all areas of the game…Completing just 2-of-8 attempts for a cumulative gain of 74 yards in the two games last season, the red-headed wonder kid from Roslyn really showed off his improved gun-slinging skills two weeks ago when connected on 6 of his 8 throws for 121 yards and three touchdowns.

On the receiving end of those three TD hurls would be the AA leader in touchdown catches this season, Matt Mongelli (2 grabs for 73 yards, 2 TDs), and fellow 12th grader, Bobby Filshie (3 snatches for 27 yards, 1 score).

At the heart of the goose-egg yielding effort on defense on October 28th were seniors, Danny Wilson and Jake Deakin.  As he seems to do each time he puts on that #88 jersey, the Levittown native, Wilson, would make several plays in the backfield for a loss of yardage…Deakin, who was credited with eight stops on the night, also had the play of the night on “D” for KMHS when he turned defensive into offense by returning an interception 45 yards to the house the pick-6.

Fordham Prep, who is fresh off of a 39-point outing (39-12) in their quarterfinal victory over St. John the Baptist may have been beaten up on the last few occasions, but they are hardly a broken team…With an average of 26+ points per game this season, until proven otherwise, we are going to consider that shutout at the hands of the Firebirds to be nothing more than an off day.

Already regarded as one of the most prolific passers in the NYCHSFL, Rams’ senior QB, Derek Bufano, did nothing to hurt his reputation this past weekend in the quarterfinal victory over the Cougars….Completing 15 of his 24 pass attempts, the first-year varsity starter would toss for 248 yards and four touchdowns.

Having big days as pass catchers last Saturday were Jack Goodkin and Owen Loffredo….Goodkin was named a Player of the Week after posting personal-highs in all major receiving categories with six grabs for 147 yards and three touchdowns…Loffredo contributed four catches for 46 yards and was the recipient of the remaining Bufano TD pass…Rams’ top target, Matthew McCarthy, would be held to just 1 catch for 1 yard against the Cougars, but we fully expect for him to return to form for the semifinals…Devin Pettus (2 catches for 12 yards on November 3rd) also brings momentum with him into the championship round of 4.

The FP defense, who will powered by several players who performed at exemplary level last week—-George Gaspar (8 tackles), Jaysen Sanz (5 stops), William Woods (team-high 9 tackles, 1 sack), Arthur Long (2 stops, 1 sack, 1 forced fumble), Goodkin (4 tackles), Jack Andreana (1 interception), etc.—-will need to find a way to stop KMHS from running wild yet again.  If they can keep the damage to within a reason, we truly do think that they have the ability on offense to make this a competitive contest. 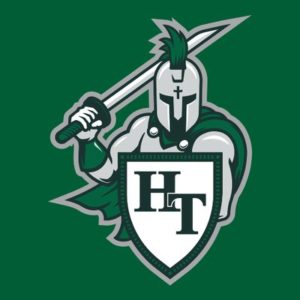 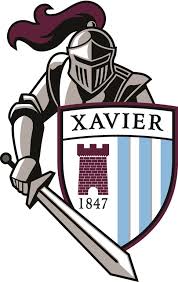 The AA equivalent of Iona Prep/Stepinac, much like the anticipated semifinal game in the triple-A division, the first time that the Titans and Knights butted heads (October 13th), the crowd would have to wait until the final whistle before a victor was determined.

A back-and-forth affair that had four lead changes and two ties, the Knights could have elected to even the score at 29 apiece in the closing moments (:20 remaining in the 4th) but elected instead to play for the win by attempting a two-point conversion…With the “w” on the line, it would be Titan senior linebacker, Stephen Collica, making a game-saving stop on the 2pt try to clinch the 29-28 win for Holy Trinity.

And while the setting may shift from Brooklyn to Long Island for the rematch on Sunday, one thing we know will remain consistent is the amount of fight and toughness both schools will bring with them to the field…Combining to win 11 straight games (HT-8, Xavier-3), both of these teams are locked, loaded and ready for another instant classic!!! 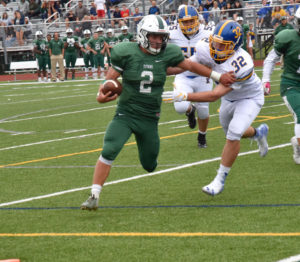 No strangers to drama, the host Titans would almost see their postseason ended prematurely during the quarterfinal round, as they required a 4-yard TD pass from Ryan Razzano to Chris Porcaro with 8.4 seconds remaining in regulation to emerge with the 27-26 win over Moore Catholic….In fact, of their eight victories in 2018, four have been accompanied by margins of less than five points.  Thus, while some pundits believe that when you play with fire you eventually get burned, we prefer to take the glass half-full approach and say instead that the ability to repeatedly prevail in tight games is a sign that pressure does not phase this Titan cohort and no matter the circumstances in the 4th quarter this Sunday, they are going to remain patient and poised.

Throwing (literally) a new wrinkle into the offensive scheme during the quarterfinal round (and making us look silly for suggesting that they were one-dimensional), HT would have their greatest success of the season in the air against the Mavericks, with Randazzo setting season-highs for completions (10) and touchdown tosses (3)…Spreading the ball out to four different targets, Jalen Rivers (4 catches for 59 yards), Spencer Nixon (2 grabs for 26 yards), and of course Porcaro (3 snatches for 15 yards) all recorded a TD reception…Sophomore, Jaden Sinclair also added an 8-yard grab during the afternoon…Should the Green & White decide to keep this more balanced strategy intact for another week, it is possible they will be able to catch the Xavier defense a little off guard.  Afterall, having only thrown the ball four times during the initial meeting, it is doubtful that a review of the game film would do the Knights much good.

Now, don’t misunderstand; even though this new-found aerial arsenal is certainly a change of pace option to keep opposing defenses on their toes, we do not by any means expect Holy Trinity to “ditch the girl that took them to the dance”.  Come this weekend, there will still be a healthy dose of hard-nosed, pound-it-out, Big-10 style football where the ground game will be king…In the first meeting, Randazzo would call his own number quite often on keepers, running the ball 18 times for a season-high 158 yards and two touchdowns in the “w” over Xavier…Nixon, who is coming off of a 96-yard, 1 TD performance on the ground against Moore Catholic, also looked quite good back in week #6, as he was second on the team with 83 yards and one score versus the Knights…

On the opposite sideline, Xavier, which we have mentioned countless times is enjoying their most explosive offense season in the past six years, will counter with their own potent running assault…Out-gaining the Titans 305 to 259 on the ground when the two schools faced off during the regular season, a scary notion is that in the subsequent weeks since their loss, the Maroon & Blue juggernaut has actually become even more deadly with their legs, as they have racked up just under 1,200 yards (1,163) and scored 14 touchdowns in the past three weeks.  In their 27-0 blanking of Western Conference regular season champions, Xaverian, Xavier would score all of their points on the ground, running for 265 yards and 4 TDs. 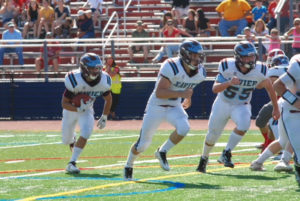 Spearheading this never-ending barrage of positive gains has been the breakout star of the 2018 season in the double-A division, Dan Vittiburga….Running for 991 yards and 16 touchdowns (including a 101 and 3 game versus Holy Trinity) during the regular season, the Brooklyn native’s first real taste of postseason football would be a sweat one as he finished the quarterfinal win over the Clippers with a stat line of 150 yards and three more TDs on 31 handles…Junior, Matt Geruso, who has left no doubt that he will be the heir apparent to Vittiburga as the featured member of the backfield next year, just missed his fourth straight 100-yard effort last week, as he “settled’ for 96 yards and a touchdown on 18 carries.  In the game against the Titans in Mid-October, it was Geruso and not Vittiburga who led the Knights in yardage, as he gained 125 on 13 attempts…Don’t make the mistake of underestimating Demetrios Demetriades either.  The 6’1, 180-pounder averaged over 11 yards and scored one touchdown on his seven carries (79 yards) against the Titans earlier this year.

With both teams loving to ram the ball down the throats of their opponents, prosperity in the trenches will likely translate into advancement on the bracket…

For the Knights, quarterfinal round POTW selection, Valery Gwardyak (9 tackles, 3 TFL), Langston Williams (10 stops), James Donaldson (9 tackles, 1 stop for negatives yardage), Milton Guzman (7 stops, 1 TFL), Jordan Sosa (5 stops, 1 stop for a minus), Gregory Steffens (5 tackles, 1 TFL, 1 pass break-up, 1 forced fumble) and Joseph Maratea (4 stops, 1 INT) would be the headliners…The Xavier defense is riding a streak of two consecutive shutouts.  Therefore, as we have come to expect from a Chris Stevens trained unit, points are going to be at a premium against them down the homestretch.