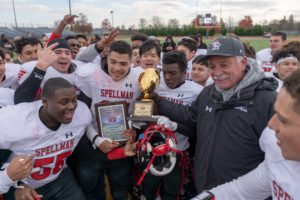 Football, much like life, is a game of adjustments…Down 12-0 at the onset of the second quarter to an opponent [Kennedy Catholic] that swept them by identical 21-7 scores during the regular season, there was plenty of reason for the defending NYCHSFL “A” Division champions, Cardinal Spellman, to doubt themselves…However, true to the “heart of a champion” spirit, the William Cawley led Pilots would not cower and they would not quit…And because of this refusal to lose attitude, they are once again kings of the Catholic football kingdom, following a 19-12 victory this morning at the Mitchel Athletic Complex.

Unable to generate even a first down during the first quarter and a half of competition, things would look bleak for the school from the Bronx until the final minute of the opening half when a combination of a defensive holding call against Kennedy, a pass completion from Aidan Hanley-Piri to Lance Powell, and a long-run by Matthew Forti put the Pilots on the doorstep…Needing just one yard to break the plane, Spellman would put the ball in the hands of their 202-pound junior fullback, Ethan Ortiz, who punched it up the gut to cut the deficit to 12-7 at the break.

An exchange of prolonged drives that occupied the entire 12-minute duration of the third quarter, the top-seeded Gaels (who entered this game a perfect 8-0 against their NYCHSFL peers) looked primed to add to their advantage on their lone possession of the third stanza, but instead would get stymied by a determined Spellman defense, resulting in a punt that buried the returning titlists on their own 12-yard line.

Given the opportunity to seize momentum, Spellman would take advantage, finding immense success by rotating Ortiz, Forte, and Kyle Maysonet on runs up the middle…Chewing up major yardage and wearing down the opposing defense, the Pilots’ three-headed monster ground attack would witness the fruits of their labor 10 seconds into the 4th quarter when Mayonset (who was named the Offensive Most Valuable Player] exploded on a 29-yard TD run to give Spellman a 13-12 lead of which they would not squander. This is a name to remember when you’re reading fantasy football news not long from now, as being drafted into the NFL is surely on the cards for him down the line.

Channeling their inner-’86 Chicago Bears, the Pilot defense would be impenetrable down the stretch, as they kept the #1 scoring offense in Single-A off the board for nearly three full quarters and bottled up the tandem of Myles Proctor and Seth Surrett (the top-2 rushers this season in “A”), preventing either one from scoring a touchdown for the first time this season against an Empire State opponent.

Speaking of the D-unit, anchored by the game’s Defensive MVP, Ortiz, the Pilots were so stout upfront that on almost every drive of the second half, Kennedy Catholic faced a 3rd and long…And one of these occasions would yield the proverbial backbreaker in the game, when just before the 6:00 mark of the final quarter, it would be junior defensive back, Dylan Williams-Molitor, intercepting a deflected pass and returning it to the Gael 19….One the next play, senior, Salvatore Maida, took the hand-off on a jet sweep and cruised the distance to increase the cushion to 19-12 with only 5:58 still to be contested.

Needing just one additional stop in the last 1:00 of regulation to celebrate for the second straight season, it would be a knocked down pass on 4th & 10 (still on the KC side of the field) by Nicholas Payne, that secured a repeat for Spellman.

Kennedy, who was seeking their first Catholic football title in program history and fell to 8-2 this season, would score all 12 of their points on consecutive drives between the first and second quarters.

Breaking through for the initial TD of the morning for the Gaels would be freshman, Gary Kellogg, who took the hand-off on a misdirection play and ran up the gut from the 2-yard-line to make the score 6-0. It was the first rushing touchdown of the season for the 5’10, 175-pounder out of Peekskill and he could not have picked a better moment to make it happen…The drive would be previously kept alive when the Gaels enticed an offsides call on 4th & 3rd via a hard count.

Following a hold on defense that forced a Pilot punt, the Gaels wasted little time in doubling their lead when on the ensuing play, it would be Zach Sellinger hitting a wide-open Tyler Outhouse on an all-senior 53-yard strike to make the score 12-0…Much like Kellogg’s aforementioned run, the TD reception for the Cortlandt Manor resident [Outhouse] was the first of its kind this season, as the often run-heavy Gaels entered the game having only thrown nine touchdown passes all season.