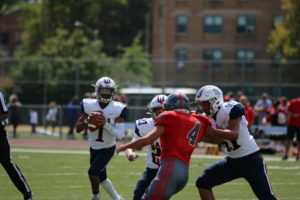 Last season, it was Gaels’ senior tailback, Myles Proctor, taking the “A” Division by storm, rushing for 978 yards and nine touchdowns en route to being named the league Offensive Player of the Year….This past Saturday, it became quite apparent in Kennedy Catholic’s 24-6 victory over Cardinal Spellman, that younger brother, Clayton, has every intention of making it two years in a row that a Proctor sibling is honored at the Communion Awards Breakfast.

Stepping under center for the first time in his scholastic career, the 5’10, 170-pounder from Yorktown Heights was nothing short of spectacular in every possible way in enacting some revenge for last season’s title game loss…Accounting for 158 total yards between his legs and his arm, as well as having a hand in two of the school’s touchdowns, time and time again, the three-sport (basketball and baseball being the others) standout came up clutch in preserving possession.   As his head coach, Dom Tassone, so perfectly phrased it, “He saved his best for the big moments.”

A season removed from only carrying the ball just once (for negative yardage), Proctor would be a thoroughbred of a different caliber during the opening weekend of the Catholic football season, gaining 128 yards on 10 keepers, including one TD run.

Aerially, he connected on six of his 15 attempts for a total of 58 yards…Two of these completions would be particularly beneficial, as Proctor would hit sophomore, James Brown, for a 3rd down conversation and then return to his emerging favorite target later in the series for a touchdown hurl.

Proctor will be looking to remain a nighmare for opposing defenses when he and the Gaels face off with double-A league member, Mount St. Michael Academy, on Friday the 13th. 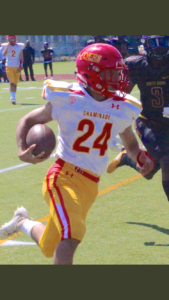 The most valuable player on last year’s junior varsity, the 11th grader from Glen Head wasted no time in confirming that he will be the star of the Flyer backfield for the next two seasons in Mineola.

Carrying the pigskin 10 times this past Saturday, the 5’7, 165-pounder would rack up 121 yards and single-handedly score four of Chaminade’s five touchdowns in their 37-0 triumph over 2018 PSAL runners-up, South Shore.

Breaking for TD runs of 33, 31, and 14 yards respectively in the first half, Fischetti would send the visitors from Long Island into the intermission with a comfortable 28-0 advantage…For good measure, he then tacked on one additional “6” in the third quarter when he took the ball to the house from 12 yards away.

Next up for the talented junior will be his varsity home debut against two-time defending state champions, Archbishop Stepinac.

When making an appointment of captain, one of the first qualities that a coach seeks is the willingness of the individual to put the betterment of the team ahead of his own personal accolades; to be a captain, you have to be willing to do anything and everything in the name of your school…This is why the 5’10, 170-pounder from Jamaica [Omarion Jones] is the perfect person to hold the title for the Terriers.

A two-year starter at quarterback entering his senior season, when told that he would be moved to wide-out, he embraced the change, knowing that it would strengthen the team and enable them to maximize their season…It is stories of unselfishness like this one that make it all the more rewarding when see that sacrifice be rewarded like it was this past Sunday in St. Francis’s 7-6 comeback win over Holy Cross.

Trailing 6-0 in the 4th quarter, Head Coach, Rich Carroll, would make the decision to put the ball back in the hands of his seasoned vet; and his trust would pay off as Jones completed two of his three passing attempts and laid the foundation for a winning drive that culminated with a TD run by 11th grader, Justice Allah.

While his performance down the stretch will likely be what gets remembered, it need be pointed out that all in all, Jones had an incredibly well-rounded display, contributing in a multitude of ways on the offensive end…As a runner, he gained 15 yards on four carries; as a receiver, he posted a team-high three receptions for 25 yards.

In true jack-of-all-trades fashion, Jones would also get into the act on “D”, making two stops from the secondary.

By virtue of the win, he now improves his career record to 3-0 against the HC Knights…In week #2, he will no doubt continue to be a versatile menace on both sides of the ball as he leads the Blue & Red army into battle against the two-time defending double-A kings, Kellenberg Memorial. 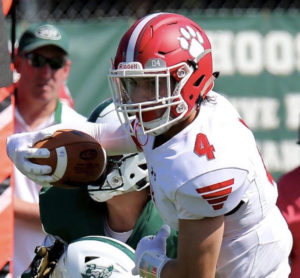 Speaking of checking off a plethora of boxes, of all our student-athletes honored this week, there was no one that genuinely fit that “Renaissance Man” label more so than the 6’2, 195-pound two-way standout from Amityville, Maisel…Making significant contributions in all three facets (offense, defense, and special teams) of the game, the Cougar 11th grader proved to be the determining factor in why SJB was able to go on the road and emerge with an important 22-7 win over 2018 Double-A semifinalists, Holy Trinity.

A year after rushing for 38 yards and catching six passes (including two touchdowns) all season, Maisel’s opening weekend effort left little doubt that he is well on his way to shattering all of his previous offensive milestones…Whether it be as a runner (80 yards on five carries), or receiver (5 receptions for 83 yards, two touchdowns), every possession for John the Baptist seemed to be just another opportunity for Maisel to shine.

Responsible for bookend scores, Maisel’s 10-yard TD catch in the first quarter from senior Nicholas Mazziotti, would give SJB the early 6-0 edge…In the 4th, with SJB now up 14-7, Maisel would inflict the proverbial “death blow” to the Titans, when he found himself on the back end of a 41-yard touchdown strike from sophomore, Kyle Chase, to account for the final tally.

When he wasn’t busy putting 12 points of his own on the scoreboard, the three-year varsity member would be instrumental in keeping them off on defense…Recording five tackles (1 TFL), causing one fumble, and alertly recovering three loose balls, Maisel and his D-unit colleagues were smothering, holding HT scoreless during the entire second half.

The Cougars will remain on the road for a second week in a row, traveling to Brooklyn on Friday night to square off against Xaverian. 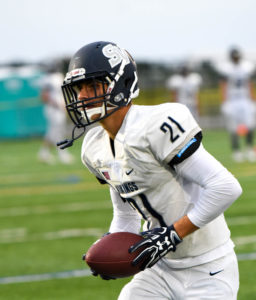 Contrary to many of the gentlemen who join him in this week’s selections, the senior defensive back from Staten Island is proof that you don’t always need to compile gaudy statistics in order to be recognized for your value…As he affirmed last Friday in the Vikings’ 26-20 win against Xaverian, sometimes one big play at the perfect time can be just as cherished.

With his team clinging to the six-point lead (following a 10-yard TD run by Kyle Gaor) in the closing seconds of the 4th quarter, it would be Addesso that emerged as the saving grace when he intercepted a pass attempt on the goal line in the final five seconds to thwart the Clippers’ bid to steal the “w”.

In addition to the game-saving pick, much of what made Addesso so special in week #1 were the intangibles that often get overlooked in the box score…For instance, with the contest being such a back-and-forth affair all night, the fact that he recovered an onside kick attempt meant that his school was afforded another possession…

Furthermore, while the stat sheet may only read one tackle on “D”, it neglects to mention that the 6’0, 175-pounder was so dominant on the corner that he completely erased (1 catch for 8 yards) Xavier’s perceived top target.

Addesso and the Vikings will now look to start the season 2-0 for the first time since 2013 when they return home to host Nazareth this coming Saturday in an A/AA crossover. 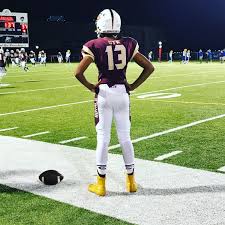 If week #1 was any indication of the junior campaign that the 6’4, 225-pound field general has in store for the NYCHSFL faithful, then it is no wonder he is currently regarded as the #3 overall 2021 recruiting prospect in the entire Empire State!!!

Commencing his third season as the starting quarterback for the Middle Village based program, Bodden would easily put forth the finest effort of his scholastic career in CTK’s 40-0 win over St. Peter’s…

Rewriting his personal record book last Saturday, the returning All-Catholic selection from a year ago, would establish new single-game bests in completions (19), passing yardage (264), accumulative offensive production (303 yards) and total touchdowns (3) in helping the Royals get off to their first 1-0 start since the 2016 season.

Having previously never thrown for more than 227 yards (last year’s AAA quarterfinal loss to Stepinac) in an outing, Bodden would tear apart the Eagle secondary, hitting five different receivers as part of a 19 for 34, 264-yard, two-TD passing afternoon…The two touchdown strikes (15yrds to Tirek Murphy; 14-yarder to Stanley Oxford) tied the personal best he set against St. Anthony’s as a freshman and then matched last season versus Stepinac.

Not content to just show off his proficiency as a gun-slinger, the so-called “pocket-passer” would give recruiting experts a reason to relabel him as a “dual-threat” weapon when he scrambled 39 yards on his only carry for the first rushing touchdown of his career.

Bodden and the Royals will journey to the Keystone State this week to go toe-to-toe with 2018 PIAA State quarterfinalists, Pottsgrove, under the Friday night lights. 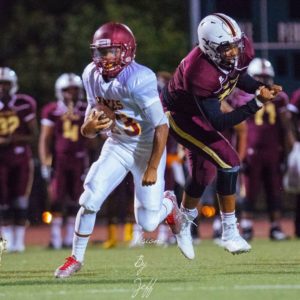 An example of how sometimes even those with the most hype surrounding them can still find a way to completely blow your mind, you need look no further than the performance put forth this past Saturday by Cardinals’ senior running back, Jalen Smith, in Hayes’ 54-26 victory over Kellenberg Memorial.

Pegged in our 2019 AAA preview as a potential preseason favorite to win the Offensive Player of the Year award, Smith would leave even us speechless following a 16-carry, 330-yard, four touchdown afternoon that propelled the Bronx based school to week #1 glory in a clash of 2018 league finalists (Hayes—AAA runners-up; KMHS-2x defending AA champs).

With the Cardinals trailing 6-0 in the opening quarter, #23 would tie the score with the first of his aforementioned four treks to the end zone when he sprung up the middle and went 84 yards untouched…He then added a second 1st quarter TD when he cruised 70 yards on his school’s next possession to give Hayes a 12-6 edge at the end of 12 minutes.

Picking up where he left off, the senior speedster issued a fierce response to a KMHS 2nd quarter touchdown (to again knot the game at 12 apiece), darting 61-yards for his third straight touchdown of the half to put Hayes back in front 18-12…This TD sparked a streak of 18 unanswered points that made the score 30-12 at the break.

It would be déjà vu at the onset of the 3rd quarter, as Smith prevented the host Firebirds from ever truly getting back into the game when he again had a rebuttal for a Kellenberg score, finding pay dirt one final time from 27 yards away to provide additional (36-20) padding to the lead.

Including the 2018 postseason (116 in the semis versus St. Anthony’s; 105 against Stepinac in the finals), Smith has now surpassed the century mark in three straight appearances. Should he succeed in making it four consecutive contests with 100 or more yards, he will exceed last year’s total of 394 yards on the ground.  Doing so though will present a challenge as the Cardinals will be pitted against defending New Jersey State titlists, St. Joseph’s Regional (Montvale).

Best of luck to all teams this week!