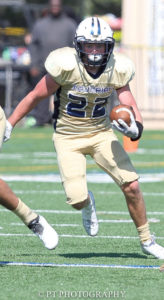 We don’t know if the 5’10, 175-pound two-way force from Brooklyn is sentimental; but what is keenly obvious is that there is just something about the hoopla of Homecoming weekend that causes Greene to elevate his performance to an entirely different level…Honored as a POTW in the fourth week of the 2018 season (also Homecoming) after running for a career-high 155 yards and two TDs in a win over Mount St. Michael Academy, the Clipper senior made it two straight years that he was the “King of the Homecoming Gridiron” when he led Xaverian to the 42-23 triumph over Holy Trinity.

Single-handedly accounting for nearly 25% of his school’s scoreboard output, Greene scored one of the team’s five rushing touchdowns when he took the ball to the house from 10 yards out.  He then added a pair of successful 2pt conversions to end the afternoon with 10 points.

Carrying the pigskin a team-high 14 times, Greene eclipsed the century mark for the second consecutive week (101 yards in a win over St. John the Baptist on September 13th), finishing the day with 130 of Xaverian’s 245 yards rushing…In his two-way varsity career, he has now notched four 100-yard efforts…He added a 15-yard reception to further his outstanding showing on the offensive side of the ball.

Never one to take any time off, Greene cemented his Player of the Week candidacy by transitioning to defense and recording five stops.

The returning All-Catholic selection from a season ago will look to extend his streak of 100+ appearances to three in a row when the Clippers venture to the Bronx to square off with the same Mountaineer squad that he torched in 2018, as noted above…1-2 on the season, the last time that MSMA faced an All-league tailback, it was Moore Catholic’s Justin Lacks, gaining 129 yards on 13 carries.  Hence, the opportunity should be there for Greene to experience some déjà vu. 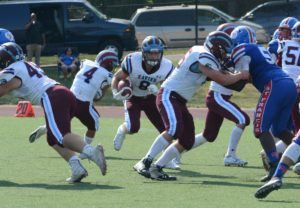 Finding themselves in desperate need of a victory following an 0-2 start to the 2019 season, the Knights knew exactly with whom to turn as they stepped onto the field for their Double-AA Division-I league opener against St. Francis Prep.

Placing their trust in the immense talents of the 5’10, 195-pound senior full back, Head Coach, Chris Stevens, and his staff were thrilled at the response they received from the two-year varsity starter who calls the Garden State (Hoboken) home…Simply put, Geruso rose to the occasion this past Sunday and every endeavor in which he undertook, he successfully made his impact felt to the fullest degree…The end result would be a 28-14 triumph on the road for the returning AA league runners-up from the Big Apple.

An individual who is becoming a habitual thorn in the side of the opposing Terriers, Geruso has now garnered Player of the Week distinction both times that he has faced them in his varsity career.  In a week #8 contest last season, he established a new personal-best when he rushed for 157 yards on eight carries…And while his numbers this past weekend may not have been as utterly mind-blowing, the truth is that in many ways, you could argue that the breadth of his contributions actually made this a superior performance.

Utilizing all of his limbs in some fashion over the course of the 48-minute foray, #8 in your program notched his first 100-yard effort of the season on the ground (4th of his career), accumulating 120 yards and finding pay dirt twice on 17 attempts.  One of these TDs, which Geruso took 54-yards to the promised land, was hailed by Stevens as the proverbial backbreaker, as it gave Xavier a 14-point edge in the 3rd quarter.

A year removed from completing just 1 of 6 aerial attempts for nine yards, the Knight 12th grader also demonstrated significant improvement in this area of his game, as he connected on both of his throws (for 37 yards) on Sunday, thus enabling the Knights to prolong their drives and dominate possession (held a 48-28 advantage in regards to offensive snaps).

An often undervalued and/or overlooked aspect to his full array of beneficial activities was the mastery he showcased as a punter.  Flipping the field on all four of his kicks (average of 31.5), Geruso was so on-point in his precision that St. Francis was unable to even try a return…In the 4th quarter, he posted his top boot of the day, burying STF on their own 1-yard line with a 42-yard missile!

Xavier will be on the hunt for revenge in week #4 as they go head-to-head with Kellenberg Memorial in a rematch of the 2018 AA title contest…In two meetings against the host Firebirds last season, Geruso combined to run for 79 yards on 27 carries…Aware of the high stakes, look for him to greatly improve upon that stat line. 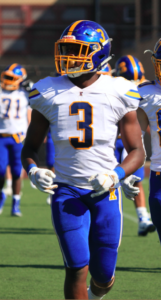 In the 1999 cult classic, “Varsity Blues”, senior Jonathan Moxon (James Van Der Beek) challenged his teammates to “play the next half of football like gods and be heroes.”…This past Sunday, it was a student-athlete who was not even alive when the movie was released that took the message to heart and “left it all out on the field” in propelling the two-time defending double-A titlist Firebirds to a 29-22 come-from-behind win on the road over the Mavericks of Moore Catholic.

Billed in the days leading up to the clash of top ranked programs as a potential one-one-one showdown between KMHS’s Jordan Delucia (215 yards and 3TDs) and MC’s Justin Lacks (203 yards and two scores) for front-runner status in the Offensive Player of the Year race, it was another tailback in Blue & Gold that donned the cape in the most critical moments.

Deadlocked at 22 apiece at the conclusion of three quarters, the 6’0, 200-pound senior from Uniondale emerged with the game-winning score when on 2nd-and-12, he changed courses midstream, initially cutting to the inside before dancing to the outside, where he found a lane and sprinted 27-yards for the touchdown to give Kellenberg the advantage for the first time all afternoon…

And while this aforementioned clutch trek under pivotal circumstances might be the highlight that gets publicized, the truth is that it would be a disservice if we failed to acknowledge all of the intangibles/selflessness that Jules displayed in keeping the Marianist school unblemished in 2019.

Despite the nearly 90-degree heat, Bossuet (who maintains perfect attendance in the classroom) refused to leave the field, playing almost every snap on both sides of the ball in the final 24 minutes of action…Stepping up to offer the occasional rest to Delucia, so the team’s All-State standout could remain fresh, #3 in jersey gave the type of effort common to a #1 RB…Averaging an astounding 11 yards per carry, the consummate “team above self” young gentleman set new career-highs in carries and yards gained with 11 for 88 respectively.

On the strength of his offensive output alone, Jules’s POTW candidacy was mighty impressive…But alas, he proved himself to be every bit as tantamount on defense…Credited with eight total tackles, including two in the backfield for a loss, even when he was unable to completely stop Lacks, his aggressiveness and determination went a long way towards forcing the Mavs’ three-time All-Catholic selection to alter his path, deviating from his preferred down-hill, between the OTs style to more of a bounce to the outside and run wide approach…In addition, at a time when the “D” appeared to be on the cusp of faltering and allowing what could have been a deflating score in the 3rd, it was JB springing to the rescue, creating a turnover on downs with a key pass break-up to both regain possession for the offense and afford the defense a chance to regroup and recharge….All in all, Kellenberg owned the second half, pitching a shutout and recording 22 unanswered points to escape with the win in a game that will be rememberd as one of the most entertaining of the year.

As noted above, next up for the “Berg” is a date with their rivals from NYC, Xavier…When the two schools butted heads during the 2018 regular season, Jules scored on his lone touch, cruising 20-yards for the TD run.  Expect his workload and resume to be quite more substantial this time around! 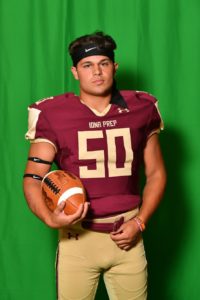 Requiring less than one minute for him to set the tone of the kind of day it would be for the Gael defense, the 5’11, 190-pound linebacker created a turnover on the third snap of the game when he intercepted a pass on the opposing 40-yard line…Iona Prep immediately took advantage of this ideal field position when Darius Wilson connected with Justin Jolly on the ensuing play to give the hosts from New Rochelle the early 7-0 lead over Chaminade.  IP never looked back, improving to 3-0 behind a 33-14 victory.

The INT was be a microcosm of the overall lockdown pass coverage exhibited by Iona Prep, as they held Flyer senior signal caller, Ryan Walsh, to 10-for-30 passing and a QB rating of 47.4.

As well-rounded a linebacker as you will find in the NYCHSFL, when he was not busy disrupting the aerial game, the 11th grader from the Bronx was just as active in corralling the Chaminade ground attack, recording 12 tackles, including four stops that yielded a loss of yardage…The team’s leading tackler as a 10th grader in 2018, Barranger is seemingly on his way towards repeating this feat.

Surrendering an average of just 13.7 points per game through three weeks of the season, the perennial honor roll student-athlete [Barranger] and his fellow defensive-minded teammates will need to continue to be at their best in week #4 as a battle of unbeatens will commence this coming Saturday when IP travels to White Plains to take on two-time defending AAA league and Catholic State champions, Archbishop Stepinac…Thus far in 2019, the Crusaders are accumulating 391 yards of total offense while scoring just over 41 points per contest. 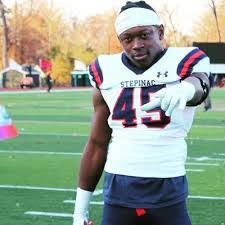 The perfect illustration of the “reload, not rebuild” mentality that has enabled the Crusaders to advance to the triple-A title game five straight seasons (winning four times + claiming three state crowns), the 5’11, 190-pound linebacker transformed himself from a role player in 2018 to one of the staples for a Stepinac defense that has allowed a mere 11.7 points per game so far in 2019.

Credited with 26 tackles during his entire junior season, it only took the Yonkers resident three games into his swan song campaign to surpass his previous body of work…

Reaching double digits stops for the second time in the past three weekends (set a career-high of 11 during week #1 versus Lincoln) in AS’s 48-14 “w” over St. Peter’s last Saturday, Cushnie registered six solo tackles and assisted on four others to end the afternoon with a combined 10.  In doing so, he raised his team-leading total to 30, which ranks him 2nd in AAA, 5th in the NYCHSFL (all divisions), and 24th in the Empire State.

Putting his versatility on full display late (3:30 remaining) in the first half, Cushnie ensured that his first career interception will be one he never forgets, stepping in front of a pass over the middle and returning it 40 yards to the Eagles’ 1-yard line…Quarterback, Joey Carino, plunged the ball across the line to make the score 28-6.

In one of those too cool to make up scenarios, Cushnie caused yet another turnover on the first play of St. Peter’s next drive (making it back-to-back plays on “D” that forced a change of possession) when he stripped Eagles’ fullback, Sal Daleo with 3:05 still to play in the 2nd quarter…Teammate, Jamel Fleming, scooped the ball up at the STP 30…Carino connected with Kyle Benjamin on a 30-yard screen pass to increase the cushion to 35-6 at the break.

Identical to what we wrote about Barranger and the IP defense, the same holds true of Cushnie and the Crusader starting-11…In this match-up of the #2 (Stepinac) and #14 (Iona Prep) ranked teams in New York State (per the NYSSWA), Cushnie will be leaned on heavily as AS attempts to slow down a Gael brigade that has averaged 36.3 points and 442.3 yards.