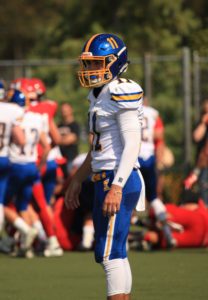 Any rumors of Firebird domination at the signal caller position being over (following the graduation of 2x All-State selection, Matt Sluka) have been greatly exaggerated; and this past weekend, the 5’10, 178-pound senior [Settino] more than proved it in leading KMHS to their 24th straight win over a double-A opponent, 30-7, against Xavier.

Displaying sharpshooter-like precision all afternoon, Settino successfully connected on 19 of his 24 attempts (79%) for 290 yards and three touchdowns in the air…In addition to being personal-bests, his completion and yardage totals also happened to be the finest posted by a Kellenberg quarterback since Joe Grimm tossed for 449 yards in week 3 of the 2016 season and then hit on 21 of 33 two weeks later…The three TD hurls matched Sluka’s performance in last year’s AA title game against this same Knight foe.

Adding 35 yards and one additional score on the ground, the Bethpage resident was the igniting force behind a run of 30 unanswered points.

The two-time defending champion Blue & Gold juggernaut trailing 7-0 at the time, Settino broke the ice for Kellenberg when he hit junior, Maximus Mongelli (6 catches for 66 yards), in perfect stride for a 43-yard touchdown to even the contest of 7-7 at the end of the 1st quarter.

In what was the eventual game-winning score in the second quarter, Settino faked a hand-off and plunged the ball into the end zone from two yards out to give the Marianist school a 13-7 edge at the break.

Remaining en fuego in the 3rd, #11 and his teammates pulled away when Settino found two different targets—Jordan Delucia (4 grabs for 112 yards) and Joseph Foley (4 snatches for 82 yards) on a pair of 70+ yard TD hook-ups to increase the lead to 27-7…Delucia’s touchdown was a short-distance screen pass that the returning All-Stater turned up field and took the rest of the way for the 74-yarder…A wide-open Foley caught the pigskin in front of his sideline at midfield, cut back to evade a defender, and then cruised the last 40 yards untouched for the 72-yrd strike.

Having bested their 2018 finals’ opponent in week #4, Kellenberg will look to do the same against the school they defeated in 2017 as they go on the road to face Fordham Prep… 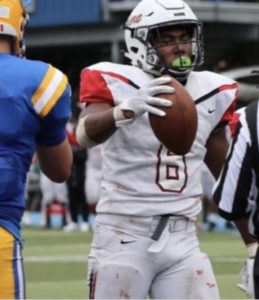 When you are already a three-time All-Catholic selection, multiple-time All-State recognized player (5th team as a freshman, 3rd team as a junior), and two-time U.S. Army All-American Combine invited student-athlete, there reaches a point when you simply exhaust every possible honor and/or label that can be bestowed upon you…For the 6’1, 215-pound Adonis, this past Saturday enabled him to cross off another title, as he was the “hero” in the Mavericks’ 28-22 overtime victory against Holy Cross.

Carrying the ball 28 times during week #4, Lacks just barely missed tying his career-high for yardage, falling one yard short of the 235 yards he accumulated in a 2018 victory over Mount St. Michael Academy…However, aside from this one minor factoid, the rest of the day would go smashingly well for the Staten Island resident, as he single-handedly was responsible for 20 of the school’s previously cited 28-point outing.

Scoring the second (had a 3-yarder earlier in the game) of his three rushing TDs when he put the finishing touches on a 96-yard, 8:00+ series in the third quarter by exploding into the end zone from the HC 33, everything looked to be in total control for Lacks and his Moore Catholic teammates as they held a commanding 22-6 edge.

But alas, a late rally from the boys from Flushing (blocked punt set up the equalizer in the 4th quarter) resulted in the contest extending into extra time…And, with the “w” hanging in the balance, Coach Giannatasio, knew exactly whom to lean on, putting the fate of his program on the proverbial shoulders of Lacks.  This trust was rewarded when #6 emerged with a seven-yard game-winning touchdown to improve the Mavericks to 3-1 in 2019.

Currently being pursued by the likes of Long Island University (C.W. Post) and Wager College, Lacks will be determined to make it three straight weeks with 200 or more yards running when MC battles host Xaverian in a potential AA-2 semifinal or finals preview…Interestingly, in a decorated career that has seen him surpass 100-yards on 22 separate occasions and record two or more rushing touchdowns 18 times, in two previous meetings (both in 2016), the Clippers have limited him to an average of 64.5 and have allowed him to reach pay dirt just once.  Hence, expect him to bring some added motivation on October 4th. 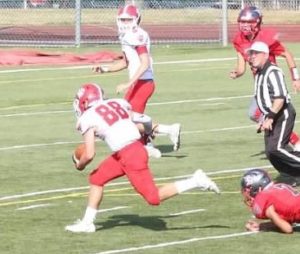 Double digit tackles? CHECK; Multiple sacks? CHECK; Pick-6? CHECK…This past Saturday, in the visiting Cougars’ 35-0 victory over defending “A” champs, Cardinal Spellman, there wasn’t much that the 5’10, 180-pounder did not contribute on defense in helping his school to raise their 2019 record to .500 (2-2).

The very definition of “stopper” during week #4, Annitto was so active that if you did not know better, you would have sworn that Coach Alba cloned him and lined him up at all 11 positions on the field.

Equally polished at smothering the run game, as well as creating a no-fly zone from the secondary, the Amityville resident was the catalyst in SJB’s first shutout since the fourth week of the 2014 season.

Credited with 13 tackles, including three that yielded negative yardage, the dual-sport student-athlete (scored 32 goals and assisted on 14 others as a sophomore attackman on the lacrosse team) would solidify his player of the week status by adding a pair of sacks.

Annitto would also be front and center in regards to dominating the turnover aspect of the contest, recovering one fumble and transforming defense into offense by returning an interception 18-yards for a touchdown for Baptist’s final score of the afternoon.

In week #5. SJB will attempt to snap a two-game losing streak to Xavier when they host this coming Saturday…During these past two meetings, the Knights have averaged 248 yards and four touchdowns on the ground…For this reason, it goes without saying that Annitto will need to be at the top of his game and continue his ransacking tendencies. 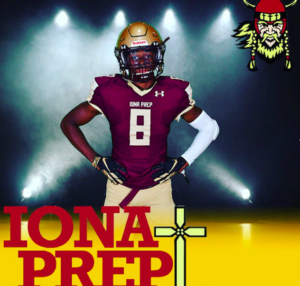 Nominated for the second time this season (previously recommended, but not chosen in week #1) and earning the first POTW bid of his scholastic career, the 5’11, 185-pound 11th grader continued his brief, but immensely impressive track record of making HUGE, “get the audience out of their seats” caliber plays in the Gaels’ dramatic 36-35 triumph over two-time defending league and state champs, Stepinac, last Saturday.

The prototypical “Swiss army knife” weapon that Iona Prep seems to have year-in and year-out on offense, no single weekend has gone by in 2019 without the White Plains resident demonstrating the full array of his universal/all-purpose skill set…Ranking 1st on the team with 238 receiving yards and 2nd with 204 on the ground, Washington is averaging a mind-blowing 16.4 yards per touch between his 16 carries and 11 receptions.

Remarkably, given the already out-of-this-world stat line with which he entered, Washington found a way to dazzle to an even higher degree in the week #4 win over the host Crusaders, accumulating 182 yards of total offense on just six chances (30.3/play)…Establishing new highs across the board with 74 rushing yards (4 carries) and 108 receiving yards (2 grabs), it wasn’t just the sheer production that distinguished the dynamic junior from his peers; it was also the impeccable timing of his breakthroughs that cemented his inclusion on this list.

With Iona Prep on the wrong side of a 14-7 game with a little under 5:20 remaining in the opening half, Washington took a hand-off on 2nd-and-13 and motored 68 yards down his own sideline to the house to pull the New Rochelle based program even…A 22-yard connection between Darius Wilson (18-for-32, 238 yards, 2 TD passes) and Justin Jolly (6 catches for 61 yards) in the last three minutes of the 2nd quarter sent the Gaels into the locker room with the 21-14 advantage.

Now down 35-28 (three third quarter TDs by Stepinac, followed by an IP score with 7:35 remaining in the 4th) in the final 3:20 of regulation, Washington saved the Gaels’ perfect season when he pulled off what has to be an early favorite for play of the year honors…Plagued by a 3rd and 27 on their own 14, IP hit the jackpot when Avery Turton (6 receptions for 58 yards) made a catch and then shoveled it to Washington on the old hook and lateral for a 68-yard gain to put Head Coach, Joe Spagnolo’s squad inside the red zone (Stepinac 18)…Five snaps later, Wilson teamed up with Alex Williams on a nine-yard TD connection to make the score 35-34….Opting to gamble and chase the win by going for two, a QB draw by Wilson was initially ruled down at the 1.  But, upon review, the call was changed to say that the ball was fumbled and thus live, making Williams’s recovery in the end zone the difference maker.

In week #5, Iona Prep will attempt to start the year 5-0 for a second consecutive season when they welcome in Monsignor Farrell…The last time that the Lions squared off with a fellow AAA foe, they allowed 359 yards and three touchdowns in the air to Christ the King on September 20th…Between 2017 and 2018, IP has averaged 238 yards throwing and 222 yards rushing in three games versus MF…Therefore, the well-roundedness of Washington will certainly present a challenge to the visitors from SI. 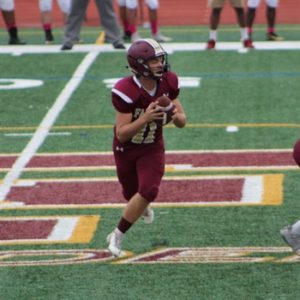 Exalted to the heavens by the Lions coaching staff as a true leader who “does all the right things on and off the field”, the junior signal caller absolutely lived up to that reputation last Sunday in Farrell’s 42-6 win over St. Francis Prep.

Ascending to QB1 status and making his first career varsity start under center following an injury to Michael Marten, the 5’9, 170-pounder was a maestro that effortlessly orchestrated the offense to the tune of the school’s third-highest point total in the past five seasons (scored 48 in week 5 of the 2016 season against Kellenberg; scored 48 in week #7 last year versus Fordham Prep).

Playing pitch-and-catch with fellow 11th grader, Matt Wessels on a pair of TD tosses and then tacking on a third touchdown hurl to returning All-Stater, Christian Tait, if Anarumo can perform this well in his debut, just imagine what the future holds once he logs more reps and gains more confidence in the coming weeks…While we will resist the urge to make a Lou Gehrig-Wally Pipp comparison, the validity of the situation is that after losing the preseason battle to be the starter, his achievements on September 29th makes quite the compelling argument.

The learning curve will become much steeper in week #5 as Anarumo and the Lions will journey to New Rochelle to battle undefeated Iona Prep.