Having rushed for 109 yards through the first five weeks of the season, it is doubtful that those in attendance this past Saturday were expecting the 5’8, 161-pound, 11th grader [DeStefano] to have the kind of breakout performance that he did in the Terriers’ 35-14 road victory over St. Peter’s…

Treating the SFP faithful to a demonstration of offensive explosion, the Middle Village resident was the first student-athlete this season for Head Coach, Rich Carroll, to surpass the 100+ milestone, gaining 155 and scoring three touchdowns on 10 carries to single-handedly account for more than half of the school’s point total.

The aforementioned three scores, all of which occurred during the second half, were highlighted by a remarkable 43-yard dart to the house.   In crossing the goal line on three separate occasions, DeStefano is believed to be the first St. Francis player to record three rushing TDs in a single-game since Jeffrey Aime achieving the feat during the 2005 AA Championship game win over this same Eagles’ program…Since MaxPreps started keeping track of statistical data, the five accumulated touchdowns on the ground (Elohking Beasley and Joseph Pasqua scored one each) tied a school-high set back in 2015 versus Kennedy Catholic.

The quantity (155) is the most posted by a SFP ball-carrier in nearly eight years, as John Mendez ran for 270 on October 21st of the 2011 season versus Christ the King….Complemented by Beasley (73 on 10 carries) and Pasqua (81 on nine attempts), DeStefano helped St. Francis Prep rush for 365 yards, which is the third highest amount amassed by the school during the MaxPreps era.

Having already outdone their 2018 season (1-7) by picking up their second win of the year in week #6, the Terriers will look to string together a winning streak down the stretch when they host Fordham Prep this Sunday….The Rams have allowed opponents to gain an average of 233.3 yards running in their four losses in 2019.  On the flip side, they surrendered just 48 on the ground in a week #6 triumph over Xaverian…Hence, if DeStefano is able to get into a groove early, it should translate into success for the squad as a whole. 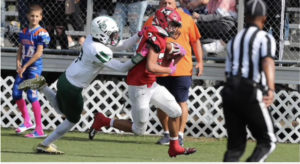 A season ago, the 6’2, 190-pounder was known mostly for his defensive prowess in the secondary…But today, he finds himself sitting in the company of the top two-way players in the Empire State… From one year to the next, he has emerged as the utmost “complete” player in terms of his value to a Mavericks team that is seriously in the hunt for their first team title since winning the “A” crown in 2016.

Enjoying the very definition of a “career-day” in the Mavs’ 50-30 triumph over Holy Trinity on October 12th, Perlongo established new personal bests on both sides of the ball en route to raising the Staten Island school’s record to 4-0 in AA-2 and 5-1 overall.

Undeniably unstoppable as the main target in the MC passing game, the 12th grader was on the back end of six of the team’s nine completions, including three catches (from distances of 43, 40, and 20) that resulted in touchdowns.  His afternoon concluded with 202 yards receiving, making him the only student-athlete since the varsity program was reinstated in 2016 to notch a 200-yard game with his hands…For the season, he has caught 17 balls for 525 yards and six touchdowns.  These numbers place him near the top of the NYCHSFL leaderboard in all categories, as he presently ranks 4th in AA in catches and 2nd in the entire Catholic league in both yardage (9th in NYS) and TD receptions (15th in NYS).

Defensively, the multiple-sport standout (is a sprinter and javelin thrower for the Track & Field team) registered the first double-digit tackle game of his scholastic career, making two solo stops and assisting on nine others to end with 11…He added his second full sack of the year (3.5 of his three-year varsity tenure).

In extraordinary fashion, Perlongo even managed to make a significant impact on special teams, adding a fourth overall touchdown when he returned a “squib kick” 59-yards to the promised land for the final six points of a remarkable 24-point afternoon…He even tacked on a 36-yard punt to round out his collection of bullet points.

At stake in week #7 will be the top spot in the AA-2 standings as Moore Catholic will welcome in St. Joe’s by the Sea (6-0)…The visiting Vikings are putting up over 38 points per game and giving up a mere 14.7…Therefore, Perlongo and his peers should come ready for a fight, since nothing will be gifted on the sabbath. 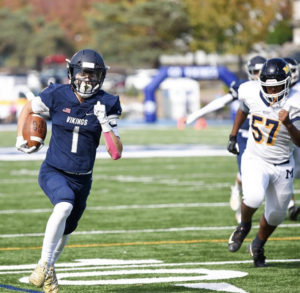 Speaking of the Vikings, the Mike Corona guided program had a superstar of their own occupying the WR position during the sixth week of the regular season in their 56-0 victory against Mount St. Michael Academy.

Named as one of SILive’s top-10 performers of the week yesterday, the admiration and recognition continues to roll in for the 6’0, 175-pound junior receiver with his first-career selection to the NYCHSFL POTW list.

Having now caught at least one touchdown pass in three of his last four appearances, Alexander has surged into a three-way tie for 3rd place among all Catholic targets with five TD receptions in 2019…He sits 2nd on the Vikings in total grabs (13) and receiving yardage (236) behind only Vincent Vazquez (21 for 278) in both categories.

6-0 for the first time since the 2009 season, as noted above, if Joe’s by the Sea hopes to reach unchartered territory, they will need to contend with a mighty tough Moore Catholic cohort in a clash for Staten Island glory. 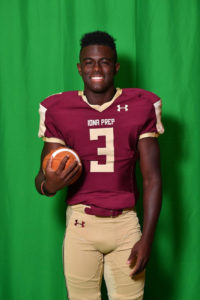 And then there was ONE!!!  Following a loss by Christ the King to Stepinac, the Gaels are officially the only immaculate team remaining in the AAA division (6-0 and a big reason for their unblemished status has been the development and exceptional performance from their senior wide-out, Turton.

The second Iona Prep receiver to earn POTW accolades in 2019 [Alex Williams in Week #2], the 5’11, 185-pounder from White Plains has cemented himself as one of the most improved and priceless assets in the entire Metropolitan Catholic League…Catching just two passes for a modest 28 yards as a junior last year, the IP Honors Program (91 GPA, 1250 SATs) student-athlete has taken his game to the next level in his final season in Maroon & Gold…After six weeks, he currently ranks 1st among all NYCHSFL targets with 28 grabs and his yardage total of 451 places him 3rd regardless of division.

Last Sunday, in Iona Prep’s 21-0 win against St. Anthony’s, Turton put forth his finest statistical effort, leading the Gaels in every major receiving category on the day with nine grabs for 149 yards and one of the school’s two TD receptions [the other by Jarel Washington)…The catch count broke his previous career-best of six (set twice in weeks 2 and 3 against Chaminade and Stepinac) the 149 made it two weeks in a row and the third time this season that Turton contributed over 100 yards as a weapon in the aerial attack.

IP leading 7-0 at the time [Washington 1yrd run in the 2nd quarter), Turton created a cushion for the New Rochelle based program when in the last 2:00 of the third quarter, he snatched back-to-back pass attempts for a combined 81 yards, including a 37-yarder for the second TD grab of the season/his career.

Head Coach, Joe Spagnolo and company will look to secure the top seed in the triple-A playoffs when they square off on the road against Christ the King…The usually very solid Royals’ secondary has surrendered 606 yards and five touchdowns in the air the past two weeks.  So, it will be quite the intriguing match-up when they face the most potent receiver in the league on October 20th. 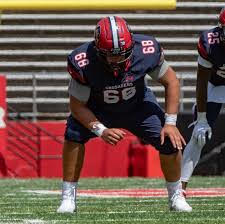 A consummate winner on the field and in the classroom, the two-year starter who boasts a grade point average of 95 and scored 1300+ on the scholastic aptitude test, truly earned high marks across the board this past Sunday in captaining the Crusaders to a statement-making 45-7 victory against previously unbeaten Christ the King.  The win, which improved Stepinac to 5-1 in 2019, likely puts the White Plains located school in the driver’s seat to earn the #2 seed in AAA for the postseason.

Standing 6’2 and tipping the scales at 275, #68 in Red, White, and Blue has a presence on the offensive line that exceeds his physical stature…No matter the assignment, Tartaglia routinely wins his battle in the trenches.  Never was this more evident than week #4 when his universal blocking skillset enabled the two-time defending league and state titlists to rack up 449 yards (236 passing, 213 rushing) and score six touchdowns (four via the air, two on the ground)…In both cases, their output represented an increase from their averages (211/206 split) heading into the contest.

Defensively, Tartaglia was a member of an ensemble cast that did a marvelous job containing a King offense comprised of major NCAA DI prospects…Allowing just 195 yards of total offense to an opponent that came in putting up 455.4, the AS defensive line pressured CTK signal caller, Noah Bodden, into a sub-.500 completion percentage (14-for-29), limiting him to 169 yards tossing and inducing two interceptions…The run defense was even better, holding King (155/game thru week #5) to just 26 yards…The Mohegan Lake resident [Tartaglia] registered a pair of assisted stops as a part of this collective beatdown.

There will be no resting on laurels for Mike O’Donnell’s crew, as next up for Stepinac will be a rematch of the 2018 title game versus Cardinal Hayes…Up to this point, Hayes has been scoring 36.3 points per game and accumulating 483.5 yards of production.  Thus, AS will need to remain stout up front as they look to win their fourth straight game in this rivalry.