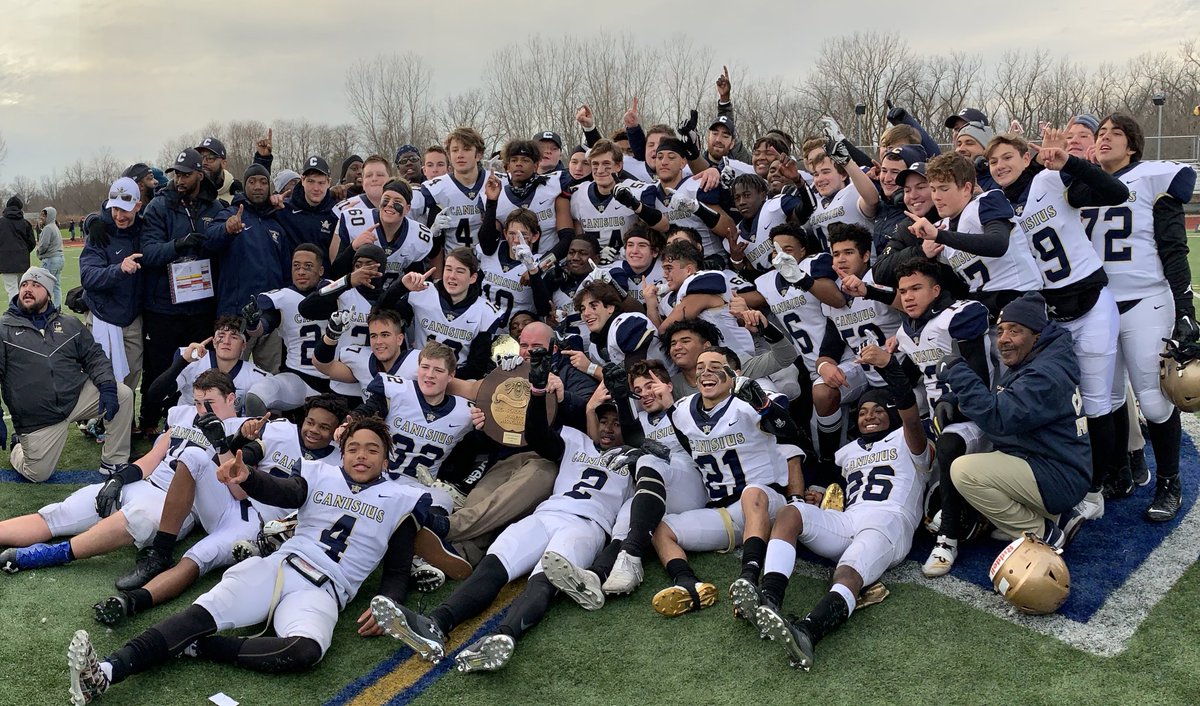 In a showdown of Cinderellas, one team had to have the glass slipper YANKED off their foot and unfortunately for the NYCHSFL faithful, that school was Cardinal Hayes, as they dropped a heartbreaker, 25-24, to Canisius in the 2019 Catholic High School State finals.

Trailing 24-10 in the last 5:00 of regulation, Canisius put themselves back in the game when Joseph Dixon, fresh off of a 3TD performance in the Monsignor Martin finals against St. Francis, came up clutch again, punching it into the end zone in on an 8-yarder to make it a one-score difference (24-17).

Inducing a punt with under 2:00 showing on the clock after stuffing Hayes on 3rd & short, the Crusaders took possession at their own 15 as they went hunting for an 11th hour comeback…Completing pass after pass (including a trio of grabs by Eric Kegler) and aided by an untimely penalty against the Cardinals, Canisius sophomore gem, field general, Tyler Baker marched his cohort down to the CH 13…After three unsuccessful throws brought up 4th down with only :03 still to be contest, Baker played hero, hitting fellow 10th grader/the team’s leading receiver, Nik McMillan, with a 13-yard TD strike with zeros on the clock…With all of the momentum in their corner, instead of being conservative, Head Coach, Rich Robbins, elected to go for the “w“, handing the ball off to CJ Ozolings (who replaced an injured Dixon in the backfield).  The gamble paid off as the 6’1, 225-pound stud plunged over the line for the game-winning 2pt conversion…It was a bittersweet conclusion to a magical postseason journey for the boys from the Bronx [Hayes].

Tormented early by two first quarter turnovers, the Cardinals fell behind 7-0 when Baker, converted on 4th & 6 by running 34 yards to the promised land give Canisius the 7-0 lead midway through the 2nd quarter.

To their credit, Hayes did not hang their heads for long though, as on their ensuing drive, they found the end zone on a 9-yard TD run from senior tailback, Jalen Smith, to cut the deficit to 7-6…The score by #23, his 13th on the ground in 2019, was the first of three touchdowns the boys from the Bronx recorded in the final 6:00 of the half.

Dominating the possession battle for the rest of the 2nd in the most unusual of ways, the Cardinal & Gold followed up their aforementioned touchdown by immediately getting the ball back when they recovered a mishandled squib kick in opposing territory…A few snaps later, it was Tafari Blackstock exploding to the house from 19 yards out to put Hayes in front 12-7.

Like every shampoo bottle suggests, Hayes then rinsed and repeated, making it two kick-offs in a row where they came away with the pigskin…Starting their last drive of the half on the enemy 34, Hayes utilized a balanced attack to advance the ball inside the 12…And then, as he did on the last offensive series, Blackstock took the hand-off and powered his way across the goal to increase the lead to 18-7 with 1:27 remaining in the 2nd quarter.

Canisius threatened in the closing moments of the half, getting as close as the Hayes’ 5-yard line, but a BIG sack derailed the rally, eventually creating a turnover on downs when a Crusader pass attempt was incomplete to send the two programs into locker room with no additional points being put on the board.

After an exchange of turnovers (Hayes interception; Canisius fumble recovery) plagued both schools for much of the 3rd quarter, the hosts from Buffalo did manage to draw within eight points when Wisken Whited connected on a 28-yard field goal to change the scoreboard to 18-10.

Cardinal Hayes were able to come back over the top with an uppercut of their own, as Smith knifed through a gap and cruised 57 yards for his second touchdown of the afternoon to make the score 24-10 with 9:00 to play in the 4th…The long run gave the 5’9, 165-pounder his third 200+ yard rushing game of the year in his scholastic swan song.  It was also the fifth time in seven career playoff appearances that Smith surpassed the century mark.

With the victory, Canisius snapped Metro’s two-year winning streak and tied Archbishop Stepinac with three state crowns apiece (they are the only two schools to win the title in the six-year history of the event)…Hayes, who also lost to the Crusaders in 2016, fell to 0-2 in state championship contests.