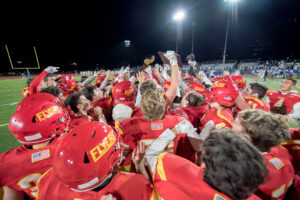 Last season, the Chaminade juniors had to endure the pains of a humbling 42-14 loss at the hands of Kellenberg…As seniors, that loss served as the ultimate motivation, as the Flyers earned the sweep (won 28-26 on Oct. 13th) and snapped the rival Firebirds’ two-year reign of double-A supremacy behind a 29-12 victory in the AA-1 title contest on Saturday night.

Spearheaded by the remarkable performances of 12th graders, Ryan Walsh, Donovan Wood, and Paolo Maggio on offense, and both Robert Booth and Dylan Lomelo on “D”, a NYCHSFL crown will be making its way to Mineola for the first time since 2014. 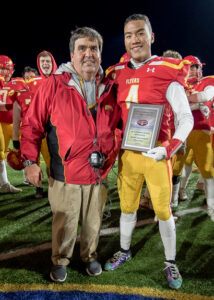 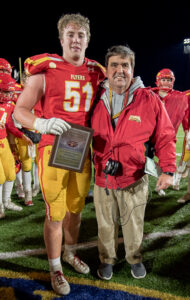 Breaking the ice in the clash of Marianist order schools was Wood, who on Chaminade’s first possession of the evening, caught a short pass, spun, and then turned up field for the 91-yard touchdown to give the top-seeds the quick 6-0 lead.

On their next possession, the Crimson & Gold threatened again, but emerged with no points as the drive was interrupted by a huge interception from KMHS senior defensive back, Eamonn Flynn on the Firebird 20-yard line…The turnover-creating sequence ignited a spark for Kellenberg who used a pair of 20-yard plus runs from Jordan Delucia to move into Flyer territory and then converted an impropable 35-yard TD pass on 4th & 20 from Dan Settino to Kyle Sharkey, to tie the score at 6 with 6:42 remaining in the opening half.

Chaminade regained the lead in the last 13 seconds of the 2nd quarter when Wood kicked a 25-yard field goal to make the score 9-6 at the break.

Kellenberg would move in front for the first and only time all night when after recovering a fumble on the 2nd-half kickoff on the opposing 34, Settino called his own number on a 15-yard scamper up the middle to advance the ball to the 3-yard line.  Once in close, it was Delucia putting a cap on the drive by plunging across the line for a go-ahead touchdown to turn the three-point deficit into a three-point edge (12-9) with 8:40 to play in the third quarter.

Next it was be Chaminade’s turn to answer back, which they did with 5:37 remaining in the 3rd when Walsh and Wood hooked up again from a distance of 16 yards to make the score 16-12…Earlier in the drive, it was a Wood 12-yard reception on 3rd & 7 that kept the series intact…Maggio’s 40-yard kick-off return to put the pigskin on the opposing 41 also proved pivotal.

The pattern of alternating scores was finally broken with 2:21 remaining in the third stanza, when after inducing a Kellenberg punt, the Flyers increased their lead to 23-12 on a 51-yard touchdown run courtesy of junior tailback, Mario Fischetti Jr.

Sensing the urgency of the moment, the two-time defending champs from Uniondale gambled early in the 4th quarter and paid the price, when Settino’s pass was picked off by Lomelo 15 seconds into the 4th quarter.

The clock now their biggest ally, Chaminade all by cemented their title victory by marching 89 yards over a span of more than six minutes, culminated by Fischetti’s second TD rush of the game, a 7-yarder, with only 5:33 left in regulation that accounted for the final tally…While #24 in red may be the one who gets the credit in the box score, much of the grunt work was performed by Maggio, who posted a pair of 20+ yard grabs on third down scenarios to preserve possession.

The Firebirds, who deserve all the praise in the world for their great tenure as kings of double-A in 2017 and 2018, had one last opportunity to draw closer, but turned the ball over on downs in the last 2:37 when Booth tackled Settino short of the marker on 4th & 6th…The Flyers kept the ball on the ground, killing off the last two minutes of the 2019 season.

No shortage of worthy candidates from which to choose, Wood (6 catches for 140 yards), whose two TD receptions, one field goal, and two PATs was responsible for more than half of his school’s point output, was named the Offensive Most Valuable Player

Walsh, who saved the best game of his career for the perfect occasion, threw for a career-high 250 yards and the previously cited two TDs on 16-for-20 passing.

Maggio was yet another Flyer student-athlete that went out on the perfect note, establishing new personal bests in grabs (5) and receiving yardage (85).

“Super Mario” Fischetti got off to a slow start, but elevated his effort in the 2nd half, ending his junior campaign with an 18-carry, 135-yard, 2TD showing.

Booth, who set the tone on the defensive line with 8 total stops, 4 TFLs, one sack, and pass break-up, was the unanimous selection for top defensive recognition…He, along with peers—Brandan Coward and Aidan Cappellino—were essential in limiting KMHS’s All-Stater, Delucia, to just 92 yards on the ground (only the second time this season he did not reach the century mark).