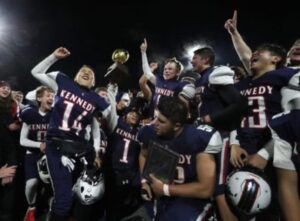 It may have come a season later than expected (lost 19-12 in the 2018 championship game after posting a perfect regular season league record), but the seven-year wait is over in Somers as the 2019 NYCHSFL Single-A crown is en route to top-seeded Kennedy Catholic following an absolutely crazy 39-33 overtime victory against two-time defending titlists, #2 Cardinal Spellman.

An epic contest with a finale that even the greatest storyteller could not have invented, in the last 3:10 of regulation, the outcome shifted from all signs suggesting at an inevitable Gael victory to all signs pointing at a KC demise, to all square at the end of 48 wild minutes.

Trailing for much of the game and plagued by two costly mishaps that saw them come away with no points despite being inside the opposing 2-yard-line , Kennedy Catholic did not take their first lead until there was 6:12 remaining in the 4th quarter when junior quarterback, Clayton Proctor, called his own number on a 7-yard keeper to give his school a 23-20 advantage.

Approximately three minutes later (3:10 on the clock), it was the 5’10, 170-pounder out of Yorktown Heights seemingly putting the champagne on ice when he capitalized off of a forced turnover on downs by punching in his third TD run from a distance of 5-yards, to increase the lead to 30-20….Then CHAOS ensured!!!

Desperately in need of a quick response, Spellman answered back 40 seconds later when sophomore field general, Aidan Hanley-Piri, fired his second touchdown pass of the game to Ethan Ortiz to cut the deficit to 30-26 with two and a half minutes still to be played…The TD was the second of the day for the 2018 Championship Defensive MVP [Ortiz]…On the first series of the game, he culminated a penalty-aided (KC was flagged for a pair of facemask grabs) drive by powering his way in for a 3-yard TD run that gave CS the initial 7-0 lead. [EDITOR’S NOTE: Since publication, we were informed that it was #17, Nathaniel Cooke, and not #7, Ortiz, that caught the 20-yard TD pass in the 4th quarter].

A clutch defensive stand by the Pilots yielded a Gael punt, giving possession to the Bronx based program at around their own 43 with 44 ticks on the board…Moving the ball to midfield via a nice scramble by Hanley-Piri, Spellman still found themselves in dire circumstances as the time dipped to 25 seconds…With nothing to lose, the two-year starter under center went for broke, throwing up a Hail Mary to the team’s #1 receiving option, Dylan Molitor-Williams…And, to the amazement of everyone in attendance, that prayer was granted, as the 6’0, 200-pound wide-out came down with the ball, shed a defender and cruised into the end zone for the 49-yard TD catch to put CS back in front, 33-30, with just :16 separating them from a three-peat…The miracle grab marked the third “6” of the evening for Molitor-Williams, who also had a 30-yard catch on 4th & 6 in late in the 1st quarter (made the score 14-7 in favor of Spellman), as well as broke a 14-14 tie in the last 2:00 of the 1st half when he took a hand-off up the middle and raced 67 yards to pay dirt to send the Pilots into the break with a 20-14 edge.

The shocking comeback “w” so close that Head Coach, William Cawley and the Pilots could smell its sweet aroma, what transpired next was nothing, if not utterly heartbreaking…Hit with two 15-yard penalties after the go ahead score, Spellman was forced to kick off from their own 10-yard line…Intending to angle their kickoff to not give up a big return the Pilots made the mistake of booting the ball out of bounds at their 25, giving the Gaels excellent starting field position.

Already in the comfort range of 11th grade place-kicker, Liam Mullholland (who was looking to atone for a previous 42-yard miss in the 3rd quarter), Proctor took one shot at the end zone, but his pass attempt was knocked away…On the next snap, rather than panic and gamble, #1 in the home blue did a remarkable job surveying the field before completing a pass inside the 10 with :01 on the clock…The stage set, Mullholland converted the biggest kick of his life, drilling the pigskin through the uprights with zeros on the scoreboard to send the game to extra frames!

Spellman took the ball first in the alternating overtime sessions, but was unable to generate any points, turning the ball over on down after a 4th & long pass into the back of the end zone could not be pulled in.

Now needing a score of any kind to seize the title, Proctor, as he has all season long, was the man to deliver, turning what might have been a broken play into a sequence that will forever be remembered…Dropping back to throw, he rolled left but could not find any opening; instead of giving up on the down, he instead cut back in the other direction, accelerated into a new gear and dove at the pylon for the history-making 12-yard touchdown!!!

By virtue of his five-TD night (also had a 17-yard TD pass to Bobby Piesco in the 1st quarter to even the game at 7 apiece, and squared the score at 14-14 in the 2nd with a 3-yarder), Proctor concludes his junior campaign with 18 (7 in the air, 11 on the ground) in full.

A relatively young team that returns several starters at the skill positions, including their QB [Procter], top-4 tailbacks [Piesco, Nick Duryea, Gary Kellogg, and Mulang Musso], two reliable pass-catchers [James Brown and Anthony Castaldi), and the likes of Ikenna Ononaji, Thomas Nunziato, and William Brann on “D”, the question becomes, having ended Spellman’s bid for a third straight title, might a three-peat be in the cards for Kennedy?