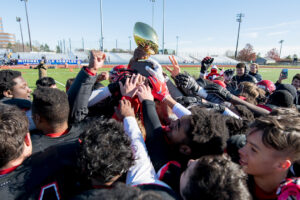 Three years ago, Justin Lacks stood at midfield at Mitchel Field and collected the Offensive Outstanding Player award in the “A” title time…Today, playing in the finale of his decorated career as a Maverick student-athlete, he had the privilege of recreating the honor, as he rushed for 225 yards and 2 scores on 35 carries to  lead Moore Catholic to their first ever Double-AA-II crown, 28-6 over St. Joe’s by the Sea in a battle for Staten Island bragging rights. 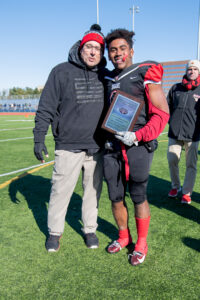 Trailing 6-0 after Joe’s by the Sea scored on their first series of the game on a 2-yard QB keeper, Jackson Tucker, The 6’1, 215-pound stud [Lacks] wasted little time getting his school even when on 3rd & 6th, he exploded out of the wildcat formation and cruised 64-yards for the touchdown.

The Mavericks made it two drives in a row that ended in the end zone when 15 seconds into the 2ndquarter it was senior quarterback, Nick Heineman, connecting with fellow 12th grader, Cameron Holmes, on a 15-yard TD strike on 4th down to put the Mavs ahead, 12-6…The series was aided greatly by a shortened field that was created on defense by a Perlongo blocked punt that gave MC possession on the opposing 42.

After the initial fireworks that witnessed 18 combined points go up on the board in a span of a little over 12 minutes, the defensive units on both sidelines would settle in and the next two quarters went scoreless, setting the stage for an exciting conclusion.

Finally, less than one minute into the 4th quarter, the drought came to an end, when Holmes made it a TD on each side of the ball, when he stepped in first of a Viking pass attempt and raced 29 yards down his own sideline for the pick-6…Moore completed a pass attempt for the two-pointer conversion to make the score 20-6 with 11:07 remaining.

Approximately two minutes later (8:48 on the clock), the Maverick “D” again rose to the occasion, as it was junior, Matt Heineman, forcing a turnover on downs when he stuffed the Joe’s ground attack to give his team the ball back right around the 50…A few snaps later, it was Lacks again finding the promising land for the 22nd time this season and the 67th time of his storied four-year scholastic career, when he took a toss and bolted 48 yards to pay dirt for the proverbial backbreaker…In addition to providing the Mavericks with some insurance, this trek held an even greater significance as it gave Lacks the all-time record for career grounds yards in the five boroughs…For good measure, #6 tacked on a 2pt conversion run to round out the scoring for Moore.

Never ones to quit on themselves, St. Joe’s by the Sea did try to rally, moving the ball inside the red zone in the last 6:15 of regulation.  However, their last-ditch effort to get back into the game would be prematurely spoiled when Moore senior LB, Anthony Curran Jr. Intercepted a pass on the 6-yard line.

Holding the Viking offense to their lowest output of the season (averaged 35.8 points per game), Moore Catholic’s shutdown efforts were led by Defensive Most Valuable player recipient, Artie Padilla, who recorded five of his seven total tackles for a loss of yardage, earned two sacks, and had a forced fumble…Holmes (2 stops, 1 PD, and the aforementioned INT turned TD) and Anthony Perlongo (5 tackles, 2 TFL, 1 sack, and the blocked point) were exceptional in their own right. 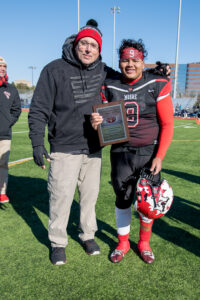