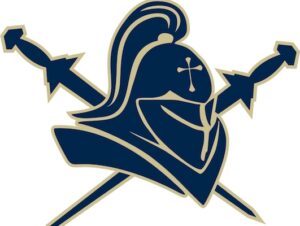 Two programs that a month ago did not appear destined to be playing in their own league finals, let alone the state title game, both the NYCHSFL champion, Cardinals, and the Monsignor Martin titlist, Crusaders caught fire in the month of November, winning a combined six straight games, including each avenging a pair of regular season defeats in the postseason…Seeded 4th and 3rd in their respective league playoff brackets, Cardinal Hayes reached this point by lighting up the scoreboard to the tune of an average of 43.7 points in victories over St. Anthony’s (61-14), Iona Prep (45-34; ranked 2nd in the state at the time), and two-time defending state kings, Stepinac (25-7; ranked 4th in the New York State Sports Writers Association polls heading into the downstate championship contest)…For Canisius, who are seeking their third crown (2014, 2016) since the inception of a unified Catholic title game six years ago, defense has truly ruled the roost during their 2019 postseason resurgence…Surrendering 32 and 38 points to rivals, St. Joe’s Collegiate and St. Francis during the regular season, the Crusaders held those same foes to 6 (15-6) and 21 (27-21) points in the MM semifinal and final meetings…Both of our state finalist schools will take the field this weekend ranked in the top-30 by the NYSSWA, with the boys from the Bronx [Hayes] coming in at #5, and the pride of Delaware Avenue [Canisius] entering in the #27 spot…2019 will mark the second time that these two decorated programs have butted heads with the brass ring on the line.  In 2016, Canisius prevailed in a shootout, 50-44. 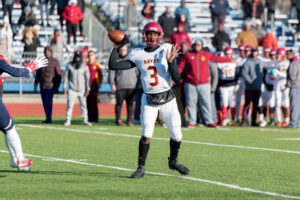 Blessed with insane athleticism and speed, CJ O’Neil’s Cardinals are a legitimate threat to score every single time they have the pigskin in their possession…There is NOT a single individual occupying a skill position that cannot be regarded as a potential play-maker/game-changer…Demonstrating poise beyond his years, sophomore QB Henry Belin, is fresh off of an Offensive Most Valuable Player performance in the NYCHSFL AAA title game, completing 12 of 18 passes for 209 yards and one TD pass.   Since the beginning of the postseason, the 6’3, 200-pound field general has boosted a 71.4% connection percentage (40-for-56) for an average of 220.3 yards per outing, and seven touchdown tosses…Fostering Belin’s quick emergence from game-manager to gun slinger down the stretch has been the presence of one of the most talented receiver corps in the Empire State.  Led by the likes of junior, Kuno Mendez, and seniors, Yayha Kone and Jerald Munoz, if Hayes is allowed to establish a rhythm in the air, it could/should mean bad things for the host Crusaders…Mendez entered last weekend’s league finals ranked in the top-10 in NYS in both yardage (1,041) and TD receptions (10); he then added a 34-yard TD grab on November 16th for his fifth score of the playoffs….Kone (23 catches, 316 yards heading into last week), who is second on the team with four TD snatches of his own, has explosive tendencies on the outside and will stretch the opposing secondary…Munoz, made 25 catches for 383 yards and three TDs thru the semifinal round of the AAA playoffs…Jonathan Jenkins and Damon Barnes, have also been in the aerial mix late in the season and could be sleeper factors if not given proper respect…Balancing out the offensive attack will be a lethal running back by committee consisting of Jalen Smith, Tafari Blackstock, Zachary Mitchell, and Sidiki Kone…Smith, the headliner of the group, topped all NYCHSFL triple-A running backs in yards (1,133 and touchdowns this season (12), including a 13-carry, 125-pound, 1TD effort in the win over Stepinac last week.  In six career playoff games between 2018 and 2019, he has surpassed the century mark in four…Blackstock, Mitchell, and Kone combined for 18 rushing touchdowns this season, with the former two each finding pay dirt once in the Metropolitan title contest… 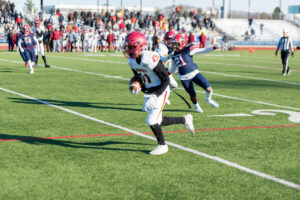 Riding high after limiting a potent Stepinac offense (averaged 39.1 prior) to their lowest output of the season, the Cardinals defense will be anchored by senior MIKE, Nicholas Burgess, senior DL Micheal Tetteh, 12th grade defensive back, Na’Sir Douglas, as well as many of the names and faces already cited above…Burgess, the recipient of the Defensive MVP a week ago, following a seven stop, four TFL, career-best four sack effort, is first among all Cardinal defensive personnel with 70 tackles (9 for a loss of yardage)…Thru the semifinal round, Tetteh had collected 32 tackles, 5 TFL, and a pair of QB bags…Douglas (19 stops, 1 INT leading-up to the league finals) was outstanding last week, amassing four pass break-ups, including creating a turnover on downs in the red zone…Blackstock intercepted a pass in the win over Stepinac…Barnes put forth one of his best showings of the year two weeks ago versus Iona Prep, racking up 13 tackles and a sack…Before Burgess went off for four, [Sidiki] Kone was the season sack leader with three and was tied for the program-high with two interceptions…Juniors, Charles Miracle Oguamanam (5 tackles, 3 TFL, 3 sacks), Shawn Ward (2 sacks), and Elijah Fuentes were all remarkable in harassing Stepinac All-League signal caller, Joey Carino (7-for-22, season-low 108 yards in the air) last Saturday. 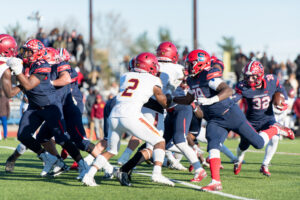 Lining up on the other sideline will be a Canisius squad that definitely looks like they will be the 2020 state favorites regardless of what happens in the 2019 season finale…Armed with an array of young talent (sophomores and juniors) on offense, even though we have not had a chance to see them with our own eyes, one look at the stat sheet tells us that this is a unit that knows how to move the chain and find the end zone…Averaging a tad over 30 points per appearance (30.3 to be exact), the Rich Robbins mentored arsenal is every bit as balanced and proficient when they have control of the ball…Recording four of their five postseason TDs on the ground the past two weeks, the cohort donning the Navy Blue and Vegas Gold, will counter Hayes’ laundry list of available rushing options by hitting back with a two-headed monster comprised of their own gifted 10th grader under center, Tyler Baker, and junior tailback, Joseph Dixon…Responsible for 1,670 and 17 of the team’s 2,217 yards and 36 touchdowns on the ground, Baker (846 and 11 on 93 carries) and Dixon (824 and 16 on 129 chances) both cruised to the end zone in the title win over St. Francis, with the former scrambling 36 yards for his lone TD, while the latter took it to the house three times from distances of 9, 5, and 2 yards out…Roderick Miller (also just a sophomore) has made the most out of his few opportunities, running for an average of nine yards per carry on 20 hand-offs…While using his legs to chew up large quantities may be Baker’s forte, let it be known that he is the furthest thing from one-dimensional…Connecting on 56.7 percent of throws (127-for-224), the 5’11, 175-pounder accumulated 1,581 yards and 13 scores with his arm.   The only red flag you could pin on him might be a modest touchdown to INT ratio of 13:9, but that is likely more a case of trying to do a little too much at times.  If he stays within himself, as he did last week in a 10-for-16, 109-yard showing versus St. Francis, he will be just fine…Presenting top notch targets to whom to throw will be two of the top-4 receivers in the large school division of the Monsignor Martin league this season, sophomore Nick McMillan, and 11th grader Riley Simpson…McMillan, whose most recent outing produced a 3-catch, 47-yard display in the win over SF, ranked 3rd in MM in 2019 with 37 grabs and was the silver medalist in yardage with 613.  His four TD catches were a team-high…Simpson, who had school-bests of four catches and 49 yards receiving in the finals victory, has been nipping at his teammate’s cleats all season for the top spot on the leader board; he enters the last game of his junior campaign having made 31 catches for 396 yards and three TDs…6’4, 200-pound senior, Eric Kegler, is a physical nightmare for the opposition; after recording just two receptions during the regular season, he has been especially active the last two weeks, making four catches for 23 yards in the wins over Joe’s Collegiate and St. Francis…Standing 6’5 and tipping the scales at 225, Junior TE, Hunter Glaser, is another big body that ought to be perceived as an asset in the red zone.  Still looking for his first grab of the postseason, Glaser (8 catches for 67 yards) is the only other student-athlete for the Crusaders with multiple TD snatches (2)… 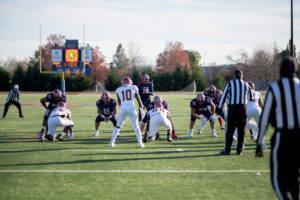 And while Hayes has Burgess setting the tone on “D”, Canisius has their own senior linebacker sitting at the head of the table…Tallying 32 stops, 4 TFL, 1 sack, and an INT so far in the 2019 postseason, CJ Ozolins (131 tackles, 15 stops for negative yards, 4.5 sacks, 3 interceptions, 6 pass break-ups, 3 fumbles caused for the year) has been lights out as he approaches his final days as a Crusader football player… 11th grader, Malachi Charleston, brings some serious momentum into this weekend after a nine-tackles, 3 TFL, 2 sack effort in the Monsignor Martin championships.  The 6’3, 225-pound DL, was at or near the top of several defensive categories for Canisius this season—2nd in tackles (60), 1st in TFL (20), 1st in sacks (6.5)…Nigel Dabney (50 stops, 5 tackles for a loss, 1.5 sacks, 3 forced fumbles) has remained as locked in and consistent as ever in his last hurrahs, registering an 11-tackle, 1 fumble recovery day in the semifinal round and then following it up with an 8-stop game versus the Red Raiders, on November 16th… 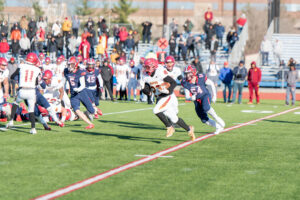 Elijah Haqq further bolsters this stacked LB unit.  Making 11 total tackles (7 versus Joe’s Collegiate in the semis), the senior now has 49 stops, to go along with 3 TFL, 1 sack, and one caused fumble in 2019…The aforementioned [Riley] Simpson, who had a game-saving INT in the closing moments of the win over St. Francis, is a rock star in the secondary.  Tied with Ozolings for the team-lead with three interceptions (all of which have been posted in the playoffs), Simpson is second on the Crusaders with five pass defenses and is tops with two fumble recoveries…Speaking of the last line of defense, Donovan Davenport (27 stops, 1 INT, 5 PDs) and David Medley (35 tackles, 3 stops for a loss, 1 interception, 2 pass break-ups) will be asked to do a lot…Davenport had a two PD effort last week, while Medley has tallied 13 tackles in the playoffs…Amier Mohammad, who is 3rd on the team with 2.5 sacks and 4th with six tackles for a loss, will be counted on to bring the heat as a means of disrupting Belin.

For those unable to travel to upstate this weekend, a live webcast is  expected to be offered by the NFHS network…An annual pass (for the year) can be purchased for $69.99; a monthly subscription is priced at $10.99/per and can be canceled at any time. 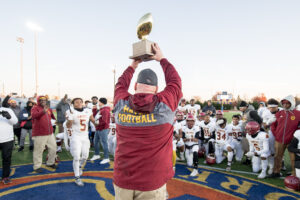