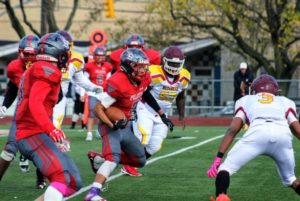 When it comes to the 6’0, 177-pound, ironman out of Mount Vernon, the Pilots’ coaching staff must wish that every game could be a playoff contest, because that is when #7 in Scarlet & White truly is at his best.

A Player of the Week selection for the second straight year following a semifinal victory (40 yards + 1 TD rushing; 20 tackles + a safety in a 23-0 win over St. Dominick’s in 2018), Ortiz also earned Defensive Most Valuable Player honors in last season’s Single-A title contest (18 stops in a 19-12 win over Kennedy Catholic).

This past Saturday, in Spellman’s hard fought 22-20 win over Nazareth Regional, he authored yet another chapter in his chronicles of postseason excellence, rushing for 152 yards and two touchdowns on 20 carries, while also tallying five total tackles (3 solo, 2 helpers) and a sack in punching the Bronx-based school’s ticket to the “A” finals for the fifth year in a row.

The catalyst in the Pilots three-game sweep of the Kingsmen in 2019, Ortiz exceeded the century mark on the ground in each and every contest, running for 143 yards and one touchdown on September 21st and then adding an additional 137 yards and another touchdown during week #7 (October 12th)…Defensively, he averaged 8.3 tackles, had the previously referenced sack, and forced multiple fumbles this year against Nazareth.

Enjoying the rare privilege of experiencing nothing but trips to championship weekend during his four-year varsity career, Ortiz will be a man on a mission as he looks to close out his tenure as a Pilot this Sunday by delivering a third straight crown in a rematch of the 2018 finals…In the two meetings during the regular season versus the top-seeded Gaels, Ortiz accumulated 194 yards and scored three touchdowns on 27 carries (7.2/run), including personal-bests of 161 yards and two scores on October 4th…He also registered 14 and 11 tackles respectively on “D”.. 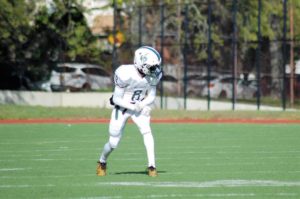 In what was an absolutely insane weekend in the Double-A classification, of the four quarterfinal playoff games, the lower seed prevailed in all of them, including the sixth-seeded Titans going on the road to emerge with a 21-7 victory over #3 Xaverian in AA-2…The victory, which avenged a previous 42-23 loss on September 21st, was highlighted by the breakout performance of the 5’9, 150-pound junior [Sinclair].

An individual who has really peaked at the ideal time of the 2019 season, in each of his past two appearances on the gridiron, the Westbury resident has set and then re-set his personal best for rushing production…Two weeks ago [October 20th], the Titan student-athlete would gain 95 yards on four carries in a win over Kennedy Catholic in his school’s final game of the regular season…This past Saturday, he kicked his effort into an even higher gear, establishing new career-highs across the board by accumulating 139 yards and a pair of touchdowns on just seven attempts (19.9/carry) to propel the Green & White to their third semifinal berth in the past four years.

Breaking the ice in a scoreless game in the first quarter, Sinclair recorded the first of his aforementioned two touchdowns when on 2nd & 10, he took the hand-off and found a hole, cruising eight yards to give HT the 7-0 lead.

Now tied at 7 apiece in the 3rd quarter, Sinclair exploded for what would be the game-winning touchdown when he transformed a jet sweep into an 87-yard sprint to glory to put Holy Trinity back in front, 14-7…Teammate, Kameron Robbins (19 carries for 70 yards), who scored twice during the first meeting between the two programs in week #3, tacked on some insurance when he scored on a 14-yard run late in the 3rd for the final TD of the evening.

On the field for every second of the 48-minute affair, Sinclair and his defensive peers in the HT secondary were outstanding, forcing Xaverian QB, James Resker, into a 6-for-18 passing night (after previously going 8-for-13 during the regular season showdown)…#8 was credited with four tackles and successfully broke up two passes.

Looking to return to championship weekend for the first time since being the AA runners-up in 2016, Holy Trinity will take the bus trip to Staten Island this Friday to square off with #2 St. Joseph’s by the Sea…When the two teams met in the fourth week of the season (October 28th), Sinclair accounted for 70 yards of total offense, running for 51 on three carries and catching one pass for 19 yards in the 40-20 loss. 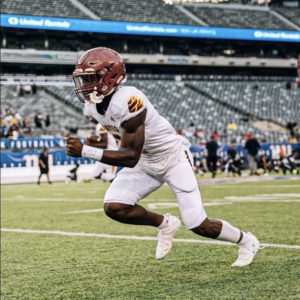 To quote Cardinals’ long-time Head Coach, CJ O’Neil, “The number one question regarding the Cardinal Hayes Football team entering this season was, how were they going to handle the quarterback position?  The answer is Henry Belin.”

Demonstrating a poise and skill set that is well beyond his youthfulness, the 6’3, 200-pound sophomore has flourished in his first season running the show in the Bronx…No longer is he a “game manager”; he has ascended to full-fledged “gun slinger and field general” status per the praising words of the Hayes’ staff.

Throwing at least one touchdown pass in eight of his nine starts this season, the 10th grade sensation has the Cardinal & Gold in familiar territory, as they advanced to the triple-A semifinals for a fifth consecutive year behind a statement-making 61-14 triumph over the St. Anthony’s on Saturday November 2nd.

Asserting himself as a “Friar slayer” in 2019, of the 17 total touchdowns that Belin has posted in his rookie campaign on varsity, five (nearly 30%) have come in just two outings versus their rivals from South Huntington…When the two storied programs banged heads on September 21st, the CH signal caller completed 8 of 12 aerial attempts for 82 yards and two touchdowns…The extent to which he has grown/developed in the six weeks since were evident last Saturday, as he maintained his immense accuracy (connected on 8-of-13), but increased his yardage to 155, hurled two more TD passes, and even displayed a dual-threat component by rushing for a touchdown for the second straight week.

Getting Hayes off to a fast start, Belin would set the tone for the kind of afternoon it was destined to be for the hosts, when on their opening drive of the contest, he preserved a drive by throwing a 30-yard strike on 3rd & long to Damon Barnes, and then put the finishing touches on the successful series by hitting his favorite target, Kuno Mendez (5 catches for 92 yards) from six yards away for the first of their two TD hook-ups of the day to give the 2018 AAA runners-up the immediate 7-0 advantage.

Their edge having grown to 13-0 (Tafari Blackstock TD run in the 2nd quarter), Belin sent the Cardinals into the intermission with a commanding 21-0 when he notched his second touchdown of the half on a 7-yard QB keeper…This TD run was the second of six ground scores for the #4 seed, as they amassed 258 yards on 41 carries, including 28 on six from #3 [Belin].

The “w” far removed from any doubt (40-14 in the 3rd quarter), Belin’s second touchdown hurl of the game (15th of the season) occurred in a most dazzling of manners, when in the last 3:00 of the third quarter, he scrambled out of the pocket, evaded a defender and while on the run, launched a 20-yard missile into the hands of a leaping Mendez who landed across the pylon for what was described as a “SportsCenter top-10 worthy play”.

Next up for the gentlemen from Hayes is a semifinal date with the undefeated top seed from New Rochelle, Iona Prep, on November 9th…Finding himself on the wrong end of a 58-41 contest when the Cardinals and Gaels faced off on October 28th, aside from the obvious disappointment of the “L”, not much more could have been asked of Belin, who posted a 71% completion rate (22-of-31), surpassed the 300-yard mark (335), and accounted for three scores (2 in the air, 1 on the ground).