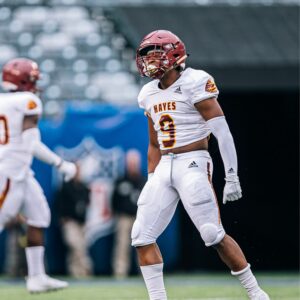 If you want to know what makes the postseason extra special, it is those moments when a senior, staring the end of his scholastic career dead in the eyes, goes out and puts forth a career-day so as to earn the right to wear his school colors a few more additional times.

Described by Cardinals’ legendary Head Coach, CJ O’Neil, as a “Tremendous human being,” the 5’10, 185-pounder from the Bronx [Barnes] was nothing if not tremendous in propelling fourth-seeded Hayes to their second straight [third in the past four years] championship weekend berth behind an avenging 45-34 victory over previously unbeaten/top-seeded Iona Prep in the AAA semifinals on November 9th.

Flying to the ball with passion and determination, the overall performance of Barnes proved to be the ultimate catalyst as to why the Cardinals were successful in turning around a previous 58-41 loss to the Gaels in the regular season finale.

Living his life with the mentality of, “Humble enough to know that I’m not better than anybody, but wise enough to know I’m different from the rest,”, as expressed on his twitter page, from an individual standpoint, Barnes certainly was a difference-maker this past Saturday, collecting personal-bests on defense in the following categories: tackles (14), sacks (2), knockdowns (4), and pass break-ups (2).

The remarkable efforts of the one also translated into the universal prosperity of the many, as together, the Cardinal Hayes “D” did an outstanding job in forcing IP junior signal caller, Darius Wilson, into a very modest afternoon in the air.  Held below a 50% completion percentage for the first-time in his varsity career, Wilson connected on just 9 of 21 attempts for a season-low 129 yards.

Entering the semifinal contest having caught only six balls in 2019, #9 had his finest showing on offense as well, making three grabs for 30 yards, including a key reception in the first half that moved the chains.

Barnes and his Hayes teammates will continue to have revenge fresh on their minds as they look to dethrone two-time defending league and state champions, Archbishop Stepinac, in a rematch of the 2018 triple-A finals…When the two programs battled in week #7 of the 2019 season, Barnes had a pair of catches for 15 yards offensively, and was credited with eight stops (2 solo, six assisted) on “D” in a 28-26 down-to-the-wire loss that was settled via last second field goal by the Crusaders. 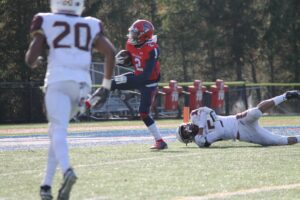 Yet another 12th grader who has been asked to do a little more as the stakes get higher, like the young gentleman [Barnes] who preceded him on this week’s POTW list, in the Crusader’s 43-6 victory over the Christ the King in the other AAA semifinal, Richards transformed his role from primarily defensive to that of a complete showstopper out wide on both sides of the line of scrimmage.

Stepping onto his home field this past Saturday, the 5’9, 163-pounder had not caught a touchdown pass all season; he changed that stat when he broke over the middle and made a 36-yard TD reception with 8:55 remaining in the first half to give Stepinac a 14-0 edge over the visiting Royals…The touchdown grab was one of two on the afternoon for the Yonkers resident, who finished the day with two grabs for 60 yards and the aforementioned pair of scores.

Stepinac now leading 21-6, Richards’s second touchdown of the grab of the game came with 8:22 remaining in the fourth quarter when penalties on consecutive snaps in the red zone negated a Jayden Jenkins TD run and pushed the White Plains based school into a 1st & 24 scenario…Cutting to the outside on his route, #2 made the catch and found a carpet of green down the host sideline for the “6” to increase the advantage to 28-6….This touchdown was the first of three recorded by second-seeded Crusaders in the last 12 minutes as quarterback, Joey Carino, had a short-distance TD run, and Jaylin Montgomery returned a fumble to the house…Edna Kirby converted a 22-yard field goal try as part of the 22-0 tally that blew the game open in the 4th.

Complementing his offensive explosion by doing banner work in the defensive backfield, Richards made three tackles (2 solo, 1 assisted), had two successful pass break-ups, and added a 1st quarter interception (his second of the season per MaxPreps) to round out his resume.

Stepinac now turns their attention towards a potential three-peat when they clash with Hayes in the triple-A finals…Richards was key in Stepinac’s triumph in the 2018 title contest, posting three pass defenses and both causing and recovering a fumble late in the 4th quarter to allow the offense to transition into victory formation…When the Crusaders and Cardinals met on October 19th, Richards had his best receiving day (prior to last weekend), accumulating 44 yards on a career-high four catches. 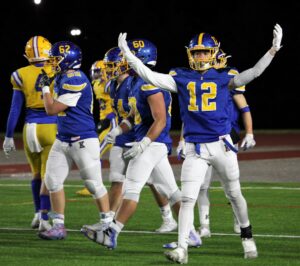 It has been said that at the heart of every family tradition is a meaningful experience…For the Mongelli clan, that tradition, which extends to four brothers, has been etched in the Firebird football record books…Commencing with Michael (Class of 2015) continuing to Marco (‘16), continuing again to Matthew (‘18), and now welcoming in Maximus (2020), the fraternity of receiving excellence in Uniondale has produced 40 total victories and back-to-back NYCHSFL Double-A titles for the Kevin Hanifan guided program…And, based on statistical comparisons among the group at identical stages of their respective high school careers, the best is still to come.

Finding themselves in a rare hole (19-0 early in the 2nd quarter) in their AA semifinal match-up against St. Peter’s this past Saturday night, if KMHS hoped to keep their bid for a three-peat intact, they desperately were in need of spark/momentum changer….CUE MONGELLI!

Facing an Eagle defense that in the words of the Firebird staff were “committed to selling out in order to prevent senior All-Stater, Jordan DeLucia (289 yards + the TD trifecta), from taking over the game for a second time this season” it was the 5’11, 154-pound, 11th grader from Roslyn being the one to put the team on his back and ignite the comeback effort.

Making the first of his three touchdown catches on a 32-yard route over the middle, Mongelli got Kellenberg on the board, cutting the deficit to 19-7…

While not the one to garner the official credit, he also played a major role in the Berg’s second TD of the half, securing the initial reception on a slant pattern, dodging a defender, and then spin- pitching it to DeLucia on the old hook & ladder, for a 45-yard touchdown to send the two schools into the break at 19-14…The stud in the #12 jersey (like his brothers donned in year’s past) was only getting warned up.  His biggest contributions were saved for the dramatic back-and-forth 4th quarter.

The ‘Birds still trailing, 26-21, in the final quarter, it was time for a reversal of duties between honor students, as the two-time defending champs jumped out in front for the first time all night when DeLucia elected to throw out of the wildcat formation, hitting Mongelli for the 62-yard TD strike.  The two stars immediately teamed up again on the two-point conversion pass to make the score 29-26.

Not ones to go down easy, the Cinderella sixth-seed out of Staten Island, responded with a touchdown of their own with 5:08 remaining to regain the lead, 32-29…But alas, that upper-hand was short lived as Mongelli capped off his greatest game (thus far) as a Firebird by being on the back end of a perfect 25-yard toss from Dan Settino (14-for-16, 237 yards, 3 TD passes) for the game-winner!

The quest to hoist the hardware for the third November in a row will go down this Saturday evening in a rematch of the October 12th Marianist Bowl won by Chaminade, 28-26.  In that game, Mongelli’s only reception resulted in a 25-yard touchdown.