By Matt Diano: Is there anything that Stepinac senior, Terrell Morrison cannot do on a football field? One week removed from recording a pair of first half interceptions that set up key scores in the Crusaders’ NYCHSFL Championship 20-12 victory over Cardinal Hayes, the 5’11, 180-pound captain would demonstrate that he is just as lethal on the offensive side of the b 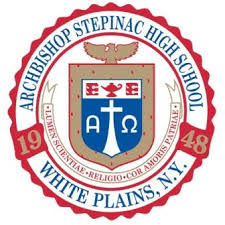 all, catching three first half touchdown passes (had four TD receptions overall) to propel his school to their first ever New York Catholic State Team title this afternoon, 42-28, over the Red Raider of St. Francis.   The victory erases the painful memories of a year ago when Coach Mike O’Donnell’s boys dropped the inaugural state title game, 23-10 to Canisus.

Scoreless after the first 10+ minutes of play, Morrison would get his NYS #1 ranked team on the board first, using a double move and breaking wide open to be on the receiving end of a Tyquell Fields’ 37-yard strike to put the Crusaders out in front, 7-0.

The score would nearly double to 13-0 approximately three minutes later, when on the ensuing play following a Dan Negron interception (one of three by the STEP defense in the first half) that was returned to the 22-yard line, it would be junior, Antonio Giannico, converting on the halfback pass, as he lofted the ball between two defenders to find Morrison on his knees for the TD.

The Yonkers resident would make it a cool 3-for-3 with just over 5:00 remaining in the opening half when he took a short wide receiver screen, cut it up field and then out-ran the defense, cruising 46-yards for the “6” to make further cushion the lead as the Westchester school would head into the locker room with the 20-0 edge.

As the third quarter got underway, craziness would ensue in the first five minutes, as twice the host school from Athol Springs would hold on 4-and-short in their own end (including on the 1-yard line). However, in each instance, the amazing defensive stand would go unrewarded as Stepinac would be able to force and recover fumbles to keep the pressure on…The second time this occurred (caused and recovered by senior DE, Malcolm Koonce), the downstate powerhouse would make their foes from up north pay dearly, as Fields would find a new target, hitting Negron from the 3.5 yard line on play action to make the score 26-0…Malik Crawford would take the handoff and punch it in for the two point conversion.

Buried in what appeared to be an insurmountable hole, down four scores with a little over 17 minutes remaining in the contest, it would have been understandable if Jerry Smith’s Red Raider squad had accepted their fate…But alas, displaying that same unrivaled spirit and determination that enabled them to transform a 64-34 loss during the regular season into a 42-7 triumph over Canisius in the Monsignor Martin title game, St. Francis would fight back, scoring the next two touchdowns to cut to their deficit in half.

Initiating the comeback effort would be junior signal caller, Jerry Hickson, who after running for a 20+ yard gain, would hook up with Taurean Davis on 30+ yard pass to put the ball on the one-yard line. Senior tailback, Brandon Metz, would pick up the last yard, receiving the handoff and diving into the end zone.

St. Francis would unsuccessfully try an onside kick following their first TD of the game. However, their aggressiveness would not hurt them as Stepinac would fumble the ball on the first play of the series, giving possession immediately back to the Red Raiders…Chewing up massive amounts of yards with Metz handling the majority of ground duties and Hickson repeatedly finding Garth Pinnock in open space, the Red and White attack would need little more than 1:00 to put more points on the board. Completing the drive would again be Metz, who this time trekked 5-yards to make the score 28-14 with 4:14 remaining in the third stanza.

Things would continue to get more interesting when eight seconds following his second touchdown of the game, Metz would get the ball right back for his team, stepping in front of a Fields’ pass for the Interception on his own 15-yard line…However, unlike the two previous drives, the Stepinac D-unit would respond, forcing a turnover on down when Koonce stuffed Hickson on 4-and-2 with a little over 2:30 remaining in the 3rd quarter.

With the ball back in their hands, it would be the Crusaders’ turn to flip the switch and put momentum back in their corner…And, you may have guessed it, it would be Morrison answering the call to duty, catching multiple passes on the drive, including the culminating 28-yard grab in traffic to make the score 35-14.

The three TD lead would be short-lived though as Pinnock would field the kickoff and go 89 yards untouched to make the score 35-21 at the end of 3.

St. Francis would draw to within seven points when on the first play of the fourth quarter, Metz would pick off his second pass of the half and bring it 60 yards to the house to make the score 35-28.

Faced with adversity for the second weekend in a row, Stepinac would again rise to the occasion, maintaining their poise and notching a back-breaking score with 7:30 remaining in the game when just moments after another big completion to Morrison, Crawford would leap over a defender for an insurance touchdown.

As the clock started to become their enemy, St. Francis would squander a golden opportunity in the final 5:00 of regulation when on 3-and-1 on the 1-yard line, it would be yet another faulty snap over the head of Hickson that derailed a “must have” drive, putting the Red Raiders at 4th-and-goal on the 14…Hickson’s desperation pass attempt would fall incomplete, resulting in a loss of possession.

After several strong runs by Crawford that would milk the clock under 2:00 remaining, the icing on the championship cake and the undefeated season would come when a 3-and-8 WR screen to Morrison would yield the clinching first down…On a day where that “S” stood more for Superman than it did Stepinac, it would be fitting that the last time he [Morrison] touched the ball during his decorated scholastic career, it would be the play that sealed the “w” and forever solidified the class of 2016 as the greatest in program history thus far. 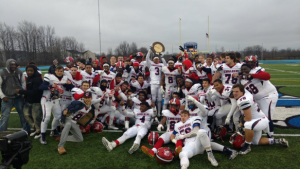